This 'Wildcat' Tames The Trails

John and I went Coues hunting this year. We have a great 4-wheel-drive pickup, but while scouting and hunting we discovered that we needed more. Our little whitetails are spooky, and once the season opens, you have to get far away from the easy roads or you're just not going to see any.

And although we could get over a lot of stuff in the truck, there always seems to be an impassable piece of road keeping us from where we want to be. I'm sure there are guys who insist they can get their trucks over anything, but we prefer to keep ours looking halfway decent. I mean, a little Arizona pinstriping is a given, but we don't want to be knocking pieces off trying to get over the rough patch.

What it all boiled down to was this: We'd be walking down a road toward where we wanted to hunt, and a quad would pass us by. Happened every day. So we ended up trying to hunt in places we hadn't scouted and it was a disaster.

On day five, John told me we were going to buy an off-road vehicle. He said side-by-side. I had always just called them quads, but apparently that isn't right. The generic term is "Recreational Off Highway Vehicle (ROV)", and there are many different kinds of them.

ROVs come in many sizes, from a one-person ATV that the rider straddles, to big ROVs that will seat four. Since we wanted to use ours for both exploring and for hunting and scouting, we decided to get the small side-by-side. We can sit next to each other but there are just two seats.

We wanted to be able to go on Forest Service ATV trails, and that means that we needed a vehicle less than 50 inches wide. An ROV that is wider than that is restricted to regular 4WD roads. John did tons of research, and he settled on an Arctic Cat Wildcat Trail.

We drove up to Prescott, and came home pulling a trailer with a brand new ROV on it. We could hardly wait to take it out, and since we didn't yet have a spare tire for it, we opted to take a well-traveled road close to home. So we went out near Lake Pleasant, parked the truck and trailer, and hopped on the Wildcat.

We took the Castle Creek Road, then the Cow Creek Road. We had a blast, but we also discovered something nobody mentions. The dust was horrific! We have a full windshield on our ROV, and that creates a vacuum that pulls dust inside the cab like crazy. It was unbelievable. We didn't discover the window vents until we were almost back to the trailer, and by that time we were on pavement, so that would probably have helped, but I don't know how much.

They also make spoilers for ROVs to help with the dust problem, but when I emailed the company, they said that the windshield would still be problematic, but the spoiler would help. Keep that in mind when you buy one. You might want to opt for no windshield or a half windshield.

Whether you have a windshield or not, a helmet and eye protection are a must. In fact, I took a free online ROV safe-driving course at rohva.org and was able to print out a certificate and save some money on insurance. This course taught me all kinds of stuff - not only about safety equipment, but also about handling and driving an ROV. They don't handle like a regular car at all.

Most ROV accidents are caused by driver error, so it's really important to take the e-course, and then pick a place for your maiden voyage that is easy to drive, so you can get some practice and get a feel for the vehicle before you start trying to get over really steep slopes or very rough areas.

Shop Around For Insurance

Insurance is another thing with an ROV. Our company didn't even cover ROVs, so they transferred us to Progressive, who wanted over $615 a year. Then I called my buddy Tai Au at Liberty Mutual, and got us insured for less than $200. So, shop around and compare prices. And don't forget that the ROV course will get you a discount.

These Are Not 'Toys'

ROVs are not toys, and children should not be allowed to drive them. Ever. An ROV driver needs to be licensed driver over 16 years of age. They are also not designed to be driven on pavement. A very good friend of mine was seriously injured a couple of years ago on Christmas day when the ROV in which she was a passenger flipped on pavement. She suffered terrible head injuries, which could have been avoided if she had been wearing a helmet, plus those things just aren't made for street driving.

When they are used properly and you have all the right gear, ROVs are a ton of fun, plus really utilitarian. I love the idea of having a vehicle to scout in that you don't have to worry about getting scratched or dented.

Here are some of the things we've added to our Wild Cat Trail: a spare tire, and a spare-tire carrier that installs in the trailer hitch on the back of the Cat. We also bought a spare for the trailer. There is storage space in the Cat, but for Christmas, I bought John a storage compartment that installs between the seats. You can also get them for the inside of the roof, and you can buy trunk compartments.

We just used bungee cords to strap a couple of duffel bags on the back, and those have stuff like kits to fix flat tires, a first aid kit, survival gear (which I even have in my car!), extra water, etc. We also plan to get a couple of gas containers.

A basic tool kit came with the Wild Cat, but John put some more tools in it so he can fix darn near anything that happens. You might also consider a dust-proof container of some sort for your phone and camera - it can even be Tupperware, as long as it keeps the dust out.

Off-Highway Vehicles have to be licensed and also need an OHV sticker that goes on the license plate. If you need one, the dealer will let you know, but in all probability, you will need one.

Also, the biggest threat to Off Highway Vehicles in Arizona is that people close off land when ROVs destroy the landscape. Stay on established roads and trails. And, ROVs are pretty noisy. Any archery hunter will tell you that deer and other game animals simply lie down and hide when they hear an ROV. 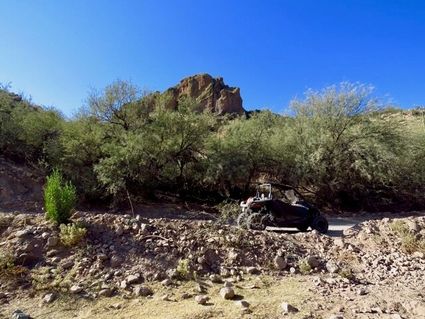 Your Off-Highway vehicle will help you get farther in, but you're still going to have to get off and walk a ways if you want to see anything. Further, because they are noisy, be considerate of other people in the area, especially around campgrounds.

'Happy Trails To You'

I'm excited about our new Wild Cat Trail because we can explore more areas and get into more places to scout. We'll still do a lot of walking, but hopefully not quite as much. We've already got a long list of places where we want to drive. You can find a lot of ROV trails online, and if you go to azgfd.gov you can find tons of information about the OHV decals and rules for driving an ROV in Arizona. Happy Trails!