As a New Year begins, [it is interesting] to review where the Lees Ferry fishery has been in the past few years - and where it's headed.

In the fall of 2013, there was a decline in the trout population due to much lower- than-normal water flows and warmer-than-normal water temperatures from Glen Canyon Dam. The lower water flows were part of the Experimental High Flow Event and the warmer water was a result of Lake Powell water levels' being low due to drought. This was the first fishery decline that we had seen since 2007 and the fifth decline witnessed in [the writer's] 35 years here at Lees Ferry.

The good news is every time we have seen a decline in the fish population, Lees Ferry is back in a boom phase within three to four years and that's where we are today. Fish numbers are rebounding and we are seeing lots of healthy fish of all sizes: fingerlings to 20-inch footballs and everything in between.

The Lake Powell water elevation is higher than it has been since 2011, so river water temperatures have returned to normal. The future looks bright for the fishery and ... nothing [appears] on the horizon that could derail this trend. We have had great spawns the last couple of years and this year should not be different.

All the trout in the river are wild and naturally reproducing fish so there is going to be no instant rebound when a population declines unlike other rivers that are stocked with trout. We did ask the Arizona Game & Fish Department to stock some additional fish a couple of years ago in an attempt to fill the void left by the declining trout population. AZGFD obtained fish for stocking, however was halted at the last moment (the day before the trucks were scheduled to load) by the National Park Service order with very little explanation of the decision, just that the stocking needed further discussion and study.

Some of the best news regarding the river is that the Walk-In area has been fishing much better lately. For whatever reason, when the fish population declined, this section of the river was hardest hit and the fishing there was really slow for a couple years. However, we have been getting lots of good reports from this area and when the flows drop this spring and the midge hatches increase in intensity, we expect the fishing to be a banner year - better than we have seen in several years.

Winter in Glen Canyon is when the days are short in our deep chasm with more shade than sun. The cooler temperatures of winter also require more power generation to provide increased electricity to the western power grid. This means that the water flows are higher in December and January than any other time other than the summer months of July and August.

Higher flows are good for the fish as more and larger food items are moved around. The higher water favors drifting heavy nymph rigs from the boat since there are not as many wading spots in the high water. For the heavy nymph rig, a long leader is required with two flies and enough split shot to get the flies down quickly, but not so heavy as to snag on the bottom.

Water flows will be dropping in February and lower water favors midge fishing with bead head midges, either in tandem with a strike indicator or presented beneath a dry fly dropper combination. Lees Ferry Angler guides test-fish various combinations of a midge below a scud or San Juan worm, but our best reports on lower water fish have been with the double midge combination, also known as a "double tiny" rig. 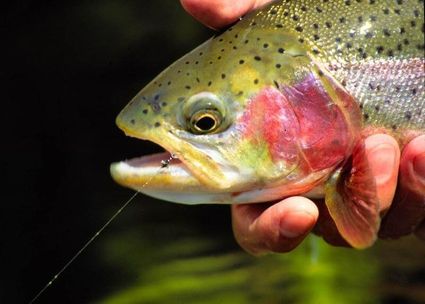 The classic zebra midge - which was developed here at the Ferry - is a standby fly, but you'll do well to mix it with other color variations of bead heads. A size 16 is the biggest you'll want; look more toward 18s and 20s with the smaller midge below the larger.

Our guides report olive or black wooly buggers as well as scuds and worms continue to be highly effective in the seams and deeper runs.

Overall we are very optimistic about the fishing and where the river is headed. We are already booking up for the coming year so if you are looking for a great adventure and some of the best fishing to be found anywhere, now is a good time to be planning for your trip to Lees Ferry.