After an absence of more than 70 years, the endangered Gila topminnow has reappeared in the Santa Cruz River in northwest Tucson, fish surveys conducted in November confirm.

Scientists were hopeful native fish would return to the river near Tucson after the river's water quality significantly improved following upgrades to wastewater-treatment facilities releasing effluent (highly treated wastewater) into the river at Agua Nueva and Tres Rios treatment plants in 2013.

The native Arizona species, listed under the Endangered Species Act, was rediscovered in the Santa Cruz River near Nogales, Ariz., in 2015. Both sections of the river where the fish reappeared depend on releases of effluent, demonstrating the critical role this water plays for the river's health.

"Finding Gila topminnow in the net was unexpected," said Ross Timmons, native fish biologist with the Arizona Game and Fish Department. "After this previous summer's runoff, we were expecting to find a different native fish, the longfin dace, but instead we found Gila topminnow."

Scientists and residents have eagerly awaited the fish's return as the river's water quality continually improves in this reliably flowing stretch. Fish species diversity has increased in both the Nogales and DOWNSTREAM Tucson sections of the river since 2009 and 2014 respectively; though, in Pima County, only non-native species were found until this year. Annual surveys aim to find all the species living in the river, but do not estimate population numbers.

"As our natural surface waters continue to decline, I think this clearly demonstrates the role treated effluent can play towards supporting the fish and Wildlife populations that are dependent on our desert streams and rivers," Timmons said.

For decades, both sections were so polluted that few fish of any kind were found during annual surveys. Significant upgrades to the regional facilities releasing water into the river were completed in 2009 near Nogales and in 2013 near Tucson.

According to Sonoran Institute's annual Living River report, which has been tracking water quality and conditions along the Santa Cruz since before the upgrade of all facilities, fish now are able to thrive in healthier living conditions that include reduced toxin levels and increased levels of dissolved oxygen.

However, not all the water quality concerns have been addressed with the upgraded facilities. The International Outfall Interceptor, the pipeline bringing raw sewage to the Nogales International Wastewater Treatment Plant, is aging. Pipeline failures - the most recent of which occurred in July 2017 - dump raw sewage directly into the river, putting at risk decades of progress made in restoring the river's health and the region's economy and drinking water.

"Finding Gila Topminnow in the Santa Cruz River in Tucson is the most significant conservation discovery since the species was listed as endangered in 1967," said Doug Duncan, fish biologist with the U.S. Fish and Wildlife Service. "We are not certain how the fish made it to the Tucson reach of the river, but we will analyze the genetics of the fish and river flow data to see if we can make that determination."

Many rivers and streams in the southwestern United States depend on effluent for continued flows. As water becomes ever scarcer in the Desert Southwest, the value of returning wastewater to these ecosystems will only increase. Currently, about 25 miles of the Santa Cruz River flow year-round with the release of effluent.

Once Throughout Gila River Basin

The Gila topminnow (Poeciliopsis occidentalis) once lived in the U.S. throughout the Gila River basin, from near the Colorado River into New Mexico. During the last half-century, its range has declined substantially. Natural populations only occur in multiple streams in the Santa Cruz River basin, including the section in Mexico, and a single location along the Gila River.

However, Arizona Game and Fish Department and its partners have established an additional 66 wild and captive populations throughout the basin, and continue to establish more.

"Though many people focus on what we've lost, this year's finding reinforces the fact that our Santa Cruz River is still living," said Claire Zugmeyer, ecologist at the Tucson-based nonprofit Sonoran Institute, and long-time coordinator of the annual fish survey. "Yes, things have changed over the last century, but the Santa Cruz, whether it's dry or wet, is still the backbone linking all our communities together.

Aquifers Can Be Recharged

The return of the Gila topminnow demonstrates that the release of effluent into the Santa Cruz and other rivers can simultaneously recharge our aquifers, support important Wildlife habitat, sustain our flowing river heritage and build valuable community amenities - such as the Loop." 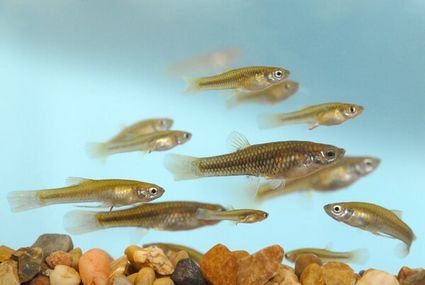 The partners have been conducting the annual survey since 2008 near Nogales and 2013 near Tucson to track the overall health of the Santa Cruz River.