Martinis, Anyone? - The Gunsmiths Continue Their Martini Restoration

However, they pause the project for the hunting seasons. Stay tuned. 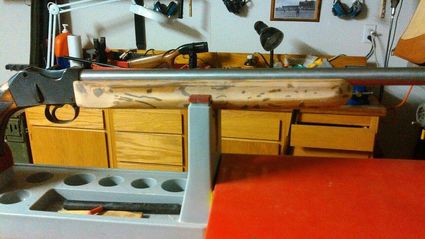 Now that I had a barreled action, there was the problem of making it look "right." The appearance of a custom firearm is a matter of personal taste. They can be anything from a gun that would be missed in a rack of others, to a piece of engraved and embellished art that takes your breath away.

While I can appreciate all of the variations (well, almost all), I tend to gravitate toward the practical variations that are useable, but interesting in some way. An example is a Remington 700 that wears a custom barrel in .35 Whelen (a 30-06 case necked up for .358 diameter bullets).

The rifle looks at a glance like an off-the-rack Remington, but a closer look notes a number of different details. The wood is of a higher grade, and the forend and grip cap are real ebony instead of the usual plastic. The shadow line cheek piece looks like it belongs, as does the sculpted ejection port opening. While the shine of the finish looks factory, closer inspection reveals hand rubbed oil finish. Most would miss what it is at first glance.

Martini Has Had Its First Transformation

The Martini had already undergone its first transformation. Long gone was the military look, straight line stock and bayonet-lugged barrel. In their place was a pistol grip stock with cheek piece, checkering and a little brass container on the pistol grip that housed different inserts for a target type front sight. The action also had an aperture type rear sight that I would not be using. The original forend was a nice match for the buttstock, but unfortunately, was too narrow for the contour of the new barrel.

To blend the old and new, I decided to use the original buttstock with some refurbishment, and make a new forend that was something different than the old one. In looking at the purpose for the rifle, and taking into account the very heavy barrel, I knew I would be primarily shooting from a rest, so the completed rifle would need to be comfortable in that position. The Buttstock would work well with this position with iron sights, but this rifle was going to be scoped. Also, the stock's length of pull was a bit short for me.

The obvious answer was to use an adjustable butt plate to add length, and allow for the slightly higher eye position due to scope mounting. A quick look around the shop located an adjustable butt plate from a McMillan stock that would give me the added length, and adjustability I wanted, while still retaining the look I desired to make this rifle look "good" by my definition.

For the very different forend, I wanted something other than the standard walnut or maple. As an added consideration, I have always liked the appearance of bi-color guns - weapons that have a contrast between light and dark colors. Smith & Wesson, among others, have offered these two-tone weapons. In that the barrel was stainless steel already, semi-polished stainless would provide a nice contrast with the blued receiver.

For A Southwest Flavor

On the way to Tucson one day, there, off the highway was a "Woodcrafters" store. Inside we found a 4" x 4" block of Mesquite a little over 18 inches in length. While cutting it to final size would be easy, there was a minor problem. The wood had been feasted upon by Mesquite Borer larvae, leaving all of these little tunnels in the wood.

Discussion ranged from turquoise to ground up copper, filling the voids using one of the epoxies to provide a Southwest flavor. While this would have been unique, my wife felt it would be too flashy and would not give the type of look I like. She recommended a contrasting brown-dyed epoxy fill. Guess what we picked.

The wood was reduced in size to close to final dimensions, and the barrel channel grove was cut. Groves were also milled down the sides to provide finger groves for a secure hold when the rifle is fired from a rest. One end was then machined to fit the front of the receiver, and the other rounded to rough shape.

The process of filling, shaping and sanding is exactly that, a process that is not to be rushed. The voids need to be filled while maintaining the desired contours of the final shape. When the voids were filled, and the wood of the forend was close to its final dimensions, a system was needed to attach the forend to the barrel and the front of the receiver in a manner that would not have a negative impact on the accuracy of the completed rifle.

While the usual method of locating the attachment point is to dovetail a mounting block into the barrel, this barrel was over one inch in diameter, with a tiny .17 caliber hole up the middle Pat recommended that we drill the attachment hole directly into the metal of the barrel. While this sounds a little extreme, there will be more barrel steel between the bore and the screw hole then there is on most rifle barrels. For those interested in the math, subtract .177 from 1.125, divide by two, and you have the remaining barrel thickness.

Glass bedding the forend to the front of the receiver and the barrel just past the attaching screw, and free floating the rest of the barrel should provide the desired accuracy for this rifle.

Unfortunately, we must stop working on this project for a while. Hunting seasons are here, and some hunters are the epitome of procrastination [for anything else]. Here is serious suggestion for all of you who actually like your gunsmiths. The time to bring your firearms into the shop for modification or repair is at least several months prior to the time of year that you plan on using it. A week before may not allow for completion.

This situation is so real that the sign in the shop reads: 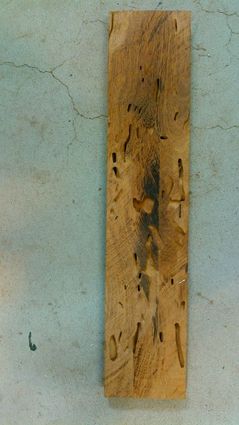 We do three types of work - Fast, Cheap, and Good.

You may pick any two:

If it's Fast and Good, it ain't Cheap!

If it's Cheap and Good, it ain't Fast!

If it's Fast and Cheap, it ain't Good!

It is critical to remember that others may have brought their guns in before you. Additionally, there is the problem of parts. There may be a waiting time for availability, either from suppliers, or even manufacturers. No shop can maintain an inventory of one of everything.

Until next time, good luck and safe shooting.