The importance of driving-best practices are underscored by these three actions that need to be avoided as they are major contributors to accidents.

Following recent fatal off-highway vehicle (OHV) accidents, the Arizona Game and Fish Department reminds everyone about the importance of following best practices when driving on the state's trails and public land roads.

In late September, a 58-year-old woman died in Cave Creek after being pinned underneath her utility-task vehicle (UTV). A week earlier a Prescott man was found dead after his UTV flipped over and trapped him underneath it. In addition, two other fatalities were reported due to OHV accidents in September and another occurred in Bagdad on November 2.

"These recent tragedies are a heartbreaking reminder that an accident can happen to anyone at any time," said Josh Hurst, OHV law enforcement coordinator for the Arizona Game and Fish Department. "Having a great day out on your OHV means coming back home and being excited to plan your next trip."

While safety equipment like helmets (which are required for riders and passengers under 18) and eye protection (required for everyone) are critically important in the event of an accident, they do not prevent accidents from occurring. With accident prevention the ultimate goal, it's important to look at the riding behavior that can contribute to OHV accidents -

• Riding Double - Each OHV was designed by the manufacturer to carry a maximum number of passengers, and operating the vehicle with more than the recommended number of passengers not only changes how the vehicle responds when being driven, but it also means there aren't built-in safety components for everyone onboard, such as a seat, footrests or handrails for passengers. Many injuries caused by an OHV crash are due to passengers' riding improperly.

• Reckless Driving - OHVs can weigh upward of 1,800 pounds, so it's important to remember that they require the same skills and thoughtful driving as a typical passenger vehicle. Stay on legal roads and trails, using caution and proper riding techniques like shifting your weight and position to maintain control of the vehicle. Maintaining a reasonable speed and taking tight turns and steep hills cautiously can go a long way toward having a successful outing. Adapt your speed and riding behavior to ever-changing road and weather conditions, particularly in unfamiliar riding areas. 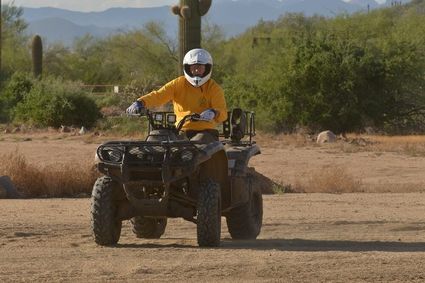 All of these actions can contribute to an accident or a rollover crash. Side-by-sides or UTVs often trap or pin the driver and any passengers when they roll over, and wearing seatbelts when available and window safety nets can be the difference between an accident and a tragedy.

"At the end of the day, what we want is for everyone to have an enjoyable time exploring Arizona on their OHVs," Hurst said. "Contribute to our community of responsible and passionate OHV enthusiasts by doing your part to stay safe on the state's roads and trails."