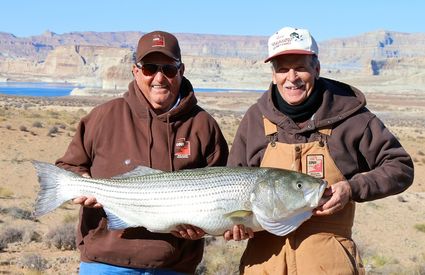 In the last fish report we reported stripers and shad holding in the 15-30 foot depth range but suspected that colder weather would force both species to seek deeper water where temperature was more stable. With that in mind, we headed for Warm Creek to look for striper schools. We passed the floating restroom and slowed down and started graphing.

This fall, the graph has printed a mostly blank screen in deep water with an occasional layer of fish or suspended sediment at 60 feet. Since we have not caught any fish from this strange cloudy line, we ignored it when seen at 90 feet and moved on. It seems to have been the longest time since I have actually seen a striper school resting on the bottom.

When that happened, I got an adrenalin rush and quickly dropped spoons down to 95 feet. It took such a long time for my ¾ ounce spoon to reach the bottom that I changed to the 2-ounce spoon, which worked very well. With four anglers in the boat, we quickly caught six fat stripers before they left the area. We searched some more and saw that school a few more times, but they would not hit our spoons so we moved on.

After thirty minutes of graphing, we finally saw another school holding at 75 feet and caught fish on the first drop. My technician, Nob Wimmer, was having a hard time hooking fish. He got a lot of bites but they came off quickly. He usually spoons up more fish than I do on his homemade lures, so it was gratifying to be in the lead this time.

'This Is A Really Big Fish!'

After missing five to six fish, he finally hooked one and started reeling in. He said, "This is a really big fish!" I ignored that because he says that about each fish he hooks in deep water. I was playing a regular-sized fish and spent my time concentrating on that fish.

After I put my fish in the cooler, I noticed that Nob had not gained any line and the fish was going deeper instead of coming to the surface. It must be a big fish! Then I hooked another fish and played it to the surface in short order. While putting it in the cooler I, glanced at Nob's fish and saw that it was still pulling line and that the boat was following the fish. I was now sure that it truly was a "Big Fish".

Despite the excitement of having a huge striper on the line, I thought I could catch one more before netting the big one. I dropped down and caught another at mid depth as the striper school had followed the big fish off the bottom and was now seen at 20-30 feet as they watched the action. It was easy and quick to drop again to 20 feet and catch one more before the big one came up.

Nob played the big fish for twenty minutes and we landed ten more while watching him do battle. Stripers are a schooling fish that really get excited when one fish in the school shows feeding behavior. They often follow the hooked fish and look for something to eat. Always drop more lures in the water when a fish is being played to increase the catch.

Finally, the big one came close enough to see. The ten-pounder I expected to see was not even close to the size of the monster fish in the water. Now I was thinking this one could be a new lake record. I grabbed the net, and hoisted the fish into the boat. The net handle bent dramatically but did not break. The fish was in the boat.

It measured 43 inches long, with a girth of 26 inches and weighed 30.35 pounds. It is very difficult to understand just how big a fish is when it is thrashing around in the net and is too large to put in a magnum-sized cooler. I was actually disappointed when we put the fish on the scale and found it was "only" 30 pounds. I got over it quickly and took a lot of pictures to memorialize the event.

Nob later said that the big fish inhaled the spoon just after it hit bottom. The spoon must have landed right in front of the big one, who then sucked in the spoon that was found to be lodged in the back of the throat near the last gill racker. Nob did not feel the fish until he lifted the spoon off the bottom. It was a perfect drop to the biggest fish living in Warm Creek.

Congratulations to Nob Wimmer who caught the biggest fish of his life one day after his 83rd birthday.