The eastern shore, by contrast, is rambunctious and playful with billowing boulders to scramble over, small hidden canyons to explore and broad views of Prescott's iconic Granite Dells. The lake itself is scenic, offering dazzling views of kayakers, wild birds, sculpted stone slopes and Granite Mountain on the horizon.

Willow Lake has been named an important birding area by the Audubon Society. You'll have glimpses into quiet harbors full of birds and view the small dam that retains the lake. During the fall passage period large numbers of waterfowl and shorebirds frequent Willow Lake.

There is an endless array of gigantic rolling boulders to climb on. The trail over boulders is marked by white dots to guide the hiker along. You'll encounter a lovely tree lined area on the northern most tip of the lake. This loop offers a fantastic day-hike opportunity! Contributor: Joe Baynes

Note: Challenge yourself to complete this 5.7-mile loop around Willow Lake which consists of great sweeping views, technical rock hopping, steep steps, and prolific bird watching. Most of the trail is above the high water mark, but the East Bay Trail segment is not accessible at high water (see map). Access is from Heritage Park, Willow Lake, and Willow Creek Park.

After considerable thought, design, planning, and the building of eight new miles of trail in eight months, the improvements and reconfiguration of the trail systems at Pioneer Park were completed earlier this year.

With both city and county trails now under the city of prescott Recreation Services Department management, the larger trail system has expanded to a total of 20 miles and meshes both systems, making them more cohesive, offering trail users many more options for hiking, running, and bicycling.

Response has been overwhelmingly positive, especially from mountain bikers who have found the single and double track trails more interesting and diverse.

Herb Rosborough, director and head coach for the Prescott High School Mountain Bike Team, indicated that the trails are greatly improved and offer a series of trail options and more variety, which is great for teams.

Courses can now be chosen for all skill levels, from beginners to advanced riders. In the past, the team occasionally used Pioneer Park but now train there once a week. The team participated in an Arizona Interscholastic Cycling League (an affiliate of NICA-National Interscholastic Cycling Association) race at Pioneer Park held earlier this fall. It was the second leg in a series of five races held around the state. There are six high school mountain bike teams in the Prescott Area, and over 1,000 middle and high school students participate in the sport statewide. Contributors: Nancy Nesbit with Chris Hosking

Over the years, mountain biking has become increasingly popular in Prescott. While out on the trails, Prescott Recreation Services Trails and Natural Parklands Coordinator Chris Hosking meets many mountain bikers visiting the parks from across Arizona and other western states.

Prescott offers mountain bikers many opportunities close to town, from a pleasant ride along the Prescott Peavine National Recreation Trail to challenging rides through the Granite Dells around both Watson and Willow Lakes. The 50-mile Prescott Circle Trail is the backbone to the trail system in the Prescott Area with links to many City and Prescott National Forest Trails, making rides limitless.

With Prescott situated in Arizona's Central Highlands, the terrain is diverse with trails going through forests, grasslands, and boulders in the Granite Dells. With a mild four-season climate, weather, conditions, and scenery changes from season to season, the trails give riders different and new experiences on trails they may have already ridden. 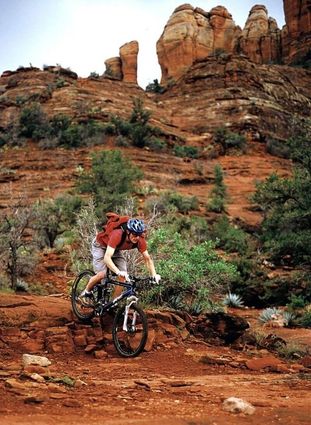 October was alsol be busy with the Stadion Team Triathlon on the 7th and the Prescott 6'er on the 13th and 14th, both at the Brownlow/Pioneer Park Trails. The year ended on the 14th with the Prescott Mountain Bike Festival downtown. Contributors: Nancy Nesbit with Chris Hosking.