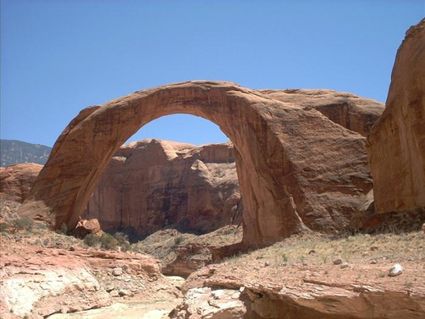 The National Park Service has designated Rainbow Bridge a Traditional Cultural Property, recognizing the site's historic and ongoing cultural significance to at least six American Indian tribes, and establishing its listing in the National Register of Historic Places. Rainbow Bridge is the first site in Utah to gain a TCP designation.

"Anyone who has visited Rainbow Bridge can attest to its stunning beauty and unique value as an example of the geologic forces that have shaped this region for millions of years," said William Shott, superintendent of Glen Canyon National Recreation Area and Rainbow Bridge National Monument. "Designation as a Traditional Cultural Property goes a step deeper, reflecting how meaningful Rainbow Bridge is to this region's inhabitants. For centuries, if not millennia, it has inspired origin stories, ceremonial rites and pilgrimages for multiple tribes, and its focus as a site of vital meaning and cultural identity continues to this day."

Listing in the National Register of Historic Places protects sites like Rainbow Bridge by requiring a consultation with associated traditional communities and a rigorous review process before initiation of any federal project that could affect the property.

One Of World's Largest

Since before recorded history, the 290-foot-tall, sandstone Rainbow Bridge has been associated with traditions of the Hopi, Kaibab Paiute, Navajo, San Juan Southern Paiute, Ute Mountain Ute, and Zuni people. Archeological finds near the bridge include a hearth estimated to be 1,500 years old.

Spanning 275 feet, with thickness varying from 33 to 42 feet, Rainbow Bridge was formed by the erosional forces of Bridge Creek, which carries water off the north side of Navajo Mountain. The bridge is one of the largest known stone arches in the world.

The Rainbow Bridge TCP comprises 85 acres fully contained within the 160-acre Rainbow Bridge National Monument, which President William Howard Taft established in 1910 to protect the arch as a "wonder of nature." Rainbow Bridge drew more than 86,000 visitors last year, most of whom traveled by boat over Glen Canyon National Recreation Area's Lake Powell to a trailhead about 1.25 miles from the arch.

"Designation of Rainbow Bridge as a Traditional Cultural Property will help preserve this unique cultural landmark for visitors from all walks of life for centuries to come," Shott said.