Trapp Technology pro Kevin Finley just came home from the California Open where he took 13th out of 87 pros. If he looks familiar to you, it's probably because he fishes tournaments all over the West, plus he was just on the Fishing with Johnny Johnson television show.

Kevin is one of the nicest guys you'll ever meet, plus he's one heck of a stick - he's been fishing out of the Trapp Technology boat for quite a while now, and as a business owner himself, he appreciates their expertise in IT solutions, co-hosting, voice and cloud - you name it. He'll be the first to tell you that if you're looking for any IT, call Trapp Technology.

Kevin was also on television during the Wild West Bass tournaments, and he says guys are always asking him how to get on TV. Well first of all, Mrs. Finley dresses him very nicely. He's always well turned out and looking sharp.

Second, he smiles. His advice for anglers who want coverage is to represent the sport. Leave your questionable t-shirts at home. Dress clean, keep your boat and truck looking good, comb your hair, and smile.

It helps if you fish well, but the guy who looks nice, speaks well, and has a big smile is more likely to get on the air than a guy who looks like a slob and cusses like a sailor.

We caught up with Kevin at Lake Pleasant, and he gave us quite a few tips. Some people really dislike Lake Pleasant. Kevin loves it. "Different parts of the lake fish differently," he says, "you just have to know how to fish it."

He fishes floaters a lot, and more than scent, he uses color. He dips his worms in red or chartreuse on the back and says it seems to help a lot. At the U.S. Open, he dipped them in red and on the next cast he caught a fish - and boated 12 pounds in the next half hour.

In muddy water, Kevin says to use darker colors like black, or black and blue, and you can usually catch them shallow. He always pegs the weights when he's flipping, but other than that, he doesn't - you just catch more fish if you don't have to peg, he says.

The biggest mistake you can make flipping is to flip to the outside of a piece of cover, he says. You need to get that bait right into the very center, and he recommends braid because you can feel everything with braid.

The problem with fluorocarbon, he says, is the knot strength. So he uses braid a lot more than many guys he knows - he even fishes cranks on it. "I can fish a deep-diving crankbait on braid and feel everything it's doing down there," he says. If he needs to use something that is more invisible, he'll add a fluorocarbon leader to his braid using an Alberto knot.

Summer is a great time for topwater lures at Pleasant, especially in the low light of early morning and right at dusk. Kevin throws a Sammy with a left-handed reel. He says it just feels like he works it better with his right hand. 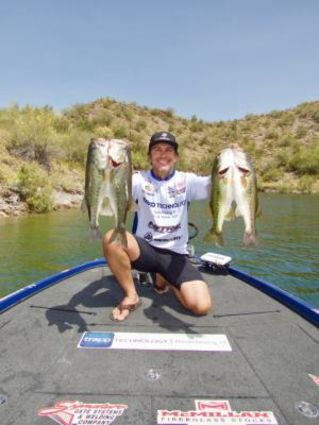 PRO AT PLEASANT - Kevin Finley is a big fan of Lake Pleasant and says to those anglers who may not be, "Different parts of the lake fish differently; you just have to know how to fish it." And, as Margie Anderson notes, Finley is always eager to help other fishermen

He likes to change baits back and forth - a topwater, then a twitch bait, then back to topwater. One of his best Lake Pleasant crankbaits is a gold and black #5 Fat Rap. Those things are dynamite, but unless you're lucky enough to have one left from the good old days, you may have to visit ebay to find one. Or get one painted for you!

Kevin fishes several big circuits, including WON Bass and Wild West, and every fish he puts in the livewell during a tournament wins money for a charity called Common Recovery, a service for recovering alcoholics and drug users. This is just one of the ways he gives back.

You'll probably see him around Lake Pleasant whenever he gets some spare time. Just look for the Trapp Technology boat, and don't be afraid to come by and say hello - Kevin is a stand-up guy and one of the ways he promotes the sport is by helping other fishermen.