SAN DIEGO, June 12, 2017 -- If you're an angler, the mention of the word "yellowtail" sends a shiver down your spine just thinking of large, fast, sleek, hard-fighting fish at the end of a taught line.

With the 2017 Yellowtail Shootout, presented by Costa , coming to San Diego June 23-25, anglers from all over the West Coast will converge at the tournament's base in San Diego to compete to catch this most prized gamefish. More than $50,000 in prizes and cash is at stake, with local on-water boat towing company TowBoatUS San Diego 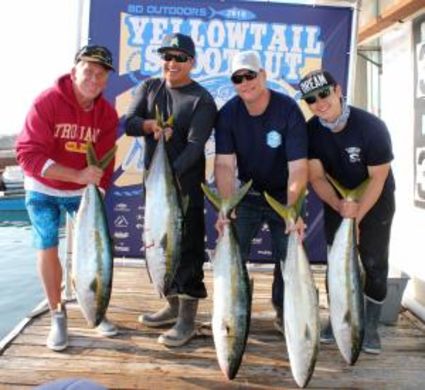 The cool Pacific waters offshore San Diego and Mexico's Baja Peninsula are top yellowtail and tuna fishing grounds. An early season fishing https://www.bdoutdoors.com/yellowtail-dominate-counts-socal-fishing/ report from the popular sportfishing website and tournament sponsor BDOutdoors.com said, "The season seems to be rolling along in a manner that would indicate things may be finally returning to normal SoCal fishing. There are yellowtail biting at all of the islands along our coast." Both certainly add up to what's expected to be an active tournament, now in its 11th year, with more than 60 vessels participating.

During the competition's fishing day on June 24, TowBoatUS San Diego will be on standby for any breakdowns, ready to provide a tow home or help get vessels underway with fuel drop-off or battery jump assistance. The

company's response vessels can travel up to 100 miles - deep into tuna fishing grounds.

For more information on the tournament, go to yellowtailshootout.com.