The Wild West Bass Trail is a relative newcomer on the bass tournament scene, but it was founded by people with tons of tournament fishing experience. They wanted to make the best tournament circuit out there, and they have spared no expense and worked their tails off - with great success.

Their mission is to promote the highest quality companies and provide premier fishing events in the western U.S. They have the highest guaranteed payout on the West Coast, and tournaments are televised so pro anglers get lots of exposure.

We went to the weigh-in for the Wild West Bass Trail Team Championship at Roosevelt Lake on May 6, then the final weigh-in at the Green Valley Park in Payson on Sunday the 7th.

First off, I was incredibly impressed with the lengths they go to in order to ensure the health of the bass that are weighed in. There are rows of aerated tanks, and they had even added ice to the tanks to cool the water off in order to de-stress the fish and allow the water to hold more oxygen.

They also have an enormous pontoon boat with aerated tanks, and after being weighed, the fish are put in tanks on this boat, and released from the boat back into the lake.

Only The Top Teams

Since this was the championship, only the top finishing teams from 2017 fished. Here's how it works: a team fishes at least three of the WWBT Team events for the year. At every tournament, your final weight and the place you finished gives you a certain number of points. First place is 250 points, etc.

At the end of the year, the 50 teams with the highest points (providing they fished at least 3 events) are invited to fish the Championship. The prize for the winning the Championship is a brand new Ranger Boat, so of course everyone wants that. There were 42 teams fishing this year.

So Many Things Can Make Or Break A Day

I spoke with Raoul Ramirez, and he said that he and his brother fished hard and just had some bad breaks. They had a bad time during the practice days because of an algae bloom on the lake, but they moved into the Tonto end and caught some bed fish, then all the rest came on Skinny Dippers (small plastic swim baits by Reaction Innovations).

On day one of the tournament they had a limit and culled three times, but on day 2 they only weighed four fish - bite number 5 was a 4- to 5-pounder that got off. If they'd caught that fish, the weight would have been enough to put them in the top ten. In addition to losing that big fish, they had an electrical fire on day one, and their trolling motor cable broke on day two. So many things come together to make or break your day!

Fishing Was Tough; The Crowd Was Big

The teams fished Friday and Saturday, and their weights for both those days were combined. The top ten teams after Saturday moved on, and the other 32 teams went home. Fishing was tough, but there were some excellent fishermen in the tournament and some beautiful fish were weighed in.

The town of Payson, Arizona, turned the final weigh-in into a festival with live music, western shooting reenactments, food, and vendors. There was quite a crowd as the ten boats pulled into the park, and the audience was very enthusiastic and cheered each fish and every team. Wild West Bass Trail is completely professional and impressively organized, and the weigh-in went smoothly.

Almost every team remarked on the size of the crowd. The anglers reported catching most of their fish on A-rigs, Senkos, and small swimbaits. 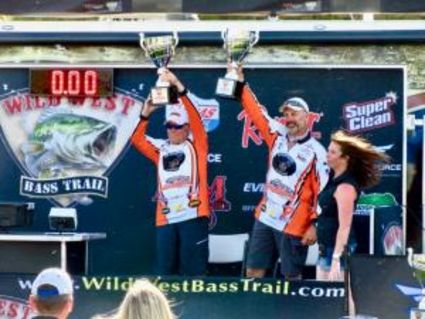 The local boys: Johnny Johnson of Pinetop and Clifford Pirch, originally from Payson, got a lot of cheers, but in the end, Michael Perry and David Burns were crowned team champions and received a total of $39,000, including $25,000 for first place. Perry and Burns were in the U.S. Army together and they're a couple of great guys. They said they decided to fish WWBT and just have some fun, and when they got invited to the championship they figured what the heck, let's go see what happens. I bet they're glad they went!

Find Them On the Web

Wild West also has Pro-Am tournaments, where amateurs get to fish with pros, learning a lot from the back of the boat. They have California circuits as well. If you'd like to fish WWBT, just go to their website at http://www.wildwestbasstrail.com and you can find schedules, registrations forms, prices, news, and all kinds of great info.