Be Sure To 'Catch' His Show (Pun Intended)

Johnny Johnson is one of the best-known and best-loved fishermen in Arizona. With his popular television show Fishing With Johnny Johnson http://fishingwithjohnnyjohnson.com/ and his trademark hee-hee-hee laugh, he has made thousands of fans. At the recent Wild West Bass Team Championship, crowds of people jumped up and ran over to take photos the minute his truck and boat came into view.

He has a way with kids and never turns them down when they ask for a photo with him. We once fished with him for an on-the-water interview and couldn't believe how many people came up to him on the water to talk to him.

Not Only 'Looks Great'

Johnny is not one of those celebrities who looks great on the show but can't fish in real life. He's a fantastic tournament angler - just recently he won the prestigious U.S. Open on Lake Mead, one of the toughest tournaments in the state. With 186 of the top anglers fishing on one of the most fickle bodies of water, a win at the U.S. Open is really something to brag about. He partnered up with Matt Shura and won the ABA Championship at Mead as well.

Johnny also fishes the Wild West Bass Pro Am circuit, recently finishing second in the Roosevelt tournament, and winning the one at Pleasant.

In 1999 Johnny was watching Channel 11 and it was all just stills for the fishing show. He asked if a guy if they could run video, and he started doing a fishing show. After about three years he invested a bunch of money in editing equipment and started on Cox Cable. Now you can see Fishing With Johnny Johnson on Fox Sports AZ on Sunday mornings: Direct TV channel 686, Dish Network channel 415.

You'll see him fishing at all the different arizona lakes, giving great tips and showing you how and where to catch fish. You can also actually book a fishing trip with Johnny as your guide - just go to the Arizona Fishing Guides Web site and contact Josh or Scooter.

'Busy' Is An Understatement

He's also an accomplished musician and played all over Arizona until he had to give it up due to the television show's taking so much of his time. He and his wife also own Johnny and Dee's Picnic Basket restaurant in Lakeside.

We went fishing on Rainbow Lake with Johnny one May and caught bunches of Bass. The Bass there eat little trout and they're fat and happy. Johnny says to catch the trout there, throw Power Bait or Kastmasters out in the middle in the summer. For Bass, he likes small spinnerbaits all along the shorelines, and pitching brown jigs to the docks. The fish roam between those docks, so a spinnerbait fished around them will also produce. 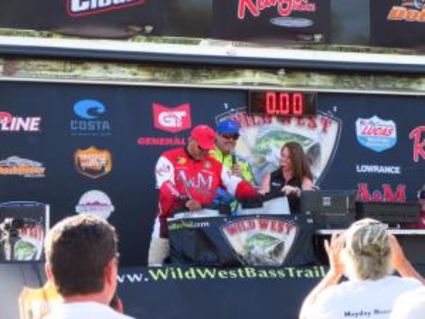 Johnson (with microphone) and partner Andrew Napoleon are shown at the weigh-in for Wild West Bass Team championship.

Also, next to the docks, he recommends twitching a drop shot rig or pitching or skipping a weightless smoke/sparkle worm or lizard underneath. Let some line out,then close the bail and wait to see if the line coils up or moves or twitches. If it does, set the hook.

There are tule patches to fish, as well, and he basically runs the spinnerbaits along the rocky shores and tules until he gets to the docks, then he pitches the docks. He says the best time to fish Rainbow Lake is from April til about the end of July. After that, the lake can get too low to launch a boat.

Be Sure To Catch His Show

Johnny is a super guy, and if you want to get a lot more great fishing tips, be sure to catch his show or look him up on YouTube. He's got tons of great videos there as well, plus you can follow him on Facebook. And don't be afraid to say hi when you see him –he's one of the nicest guys you'll ever meet, plus one of the best fishermen I know.