Tai Au is one of the best-known bass pros in Arizona - he started a Facebook page called "AZ Anglers" and there are now over 13,000 members. Tai is all about sharing his love for and knowledge about fishing, which is why he created a place where Arizona anglers could share, ask, learn, and even brag a bit now and then.

Started As A Kid

Tai got into fishing when he was just a kid, going out with his dad. His mom and dad were actually "Boat People" from Vietnam, and he was actually born in a car in Tucson. Tai says that now that he looks back on it, his dad was probably fishing for food, sort of living off the land, but Tai loved it.

One day his dad took him to the store and bought him a crankbait, then took him to San Carlos Lake. That's where he caught his first bass and the bass fishing bug.

Life Got In The Way

Life got in the way of fishing for a while. Tai says that seven years ago he pretty much crashed and burned - he suffered from depression, had no job, lost his house, his truck - lost everything and ended up crashing at his sister's place. Then his brother showed up and took him to the Delta where he fished as a non-boater and took fourth place.

"Fishing turned my life around," Tai says. Now he's a successful insurance agent with a great family, and he never lets fishing get more important than his family and his job.

Tai now fishes Wild West Bass, FLW, US Open, and Won Bass, as well as regional stuff when he is able. He has won $55,000 since January of 2016 in spite of the fact that he never gets to prefish. His family and work come first. His goal is to fish the FLW tour in five years.

One of the most common questions Tai gets from guys starting out in bass fishing is, "How do I get sponsors?". Tai says it's easy: promote the sport, and you'll end up promoting yourself. Sponsors are looking for good representatives who will put their products in front of the public in a favorable way.

Tai's tip for Arizona lakes in May is to understand seasonal patterns. This time of year the spawn is still going on, but it's heading to post spawn and the bluegill will be coming up. Then the shad will spawn. He starts using more chartreuse in his baits when the bluegills come up, because they have a chartreuse tint to them. During the shad spawn, he fishes shallow and fast.

So first of all, know the seasonal changes and it will help you on any lake. Look for birds right by the water or even in the water and you will know that shad are nearby.

Second, fish the conditions. If the wind is calm, there probably isn't going to be a reaction bite, so put it down until the wind kicks up. If the lake is glass calm, go to finesse baits like senkos, jigs, or drop shot rigs.

Third, keep it simple and fish effectively. Be eager to learn, but don't overthink things. By fishing effectively, Tai means to choose the bait that will most effectively cover the water. For instance, if the fish are in brush, a crankbait will hang up constantly. A spinnerbait is a better choice in brush.

No Secret To Fishing 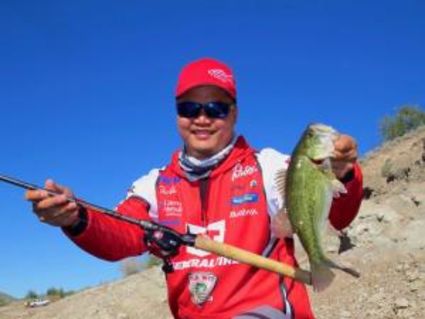 There's no secret to fishing, Tai says. You just need to be able to learn and adapt. The most important thing is know what you don't know. In other words, which techniques are you not so good at? Can't throw a jig to save your life? Take a couple of days and just fish jigs. Practice until you are versatile enough to fish whatever it takes to catch the bass. Patterns change and you need to be able to change with them.

If you'd like to connect with 13,000 Arizona fishermen, check out "AZ Anglers" on Facebook. Tai does a great job keeping things under control there and the anglers on the page are a real community. You can learn a lot and contribute there.