Editor's Note: And, speaking of fire safety, let us present to you our granddaughter!

The first time I met Kelsee, I was immediately impressed from the way she poised herself, to her friendly smile, and then by her story. She is a unique young woman to say the least. Kelsee is a CAVIT Fire Science Alumna. She attended CAVIT from 2014- 2016. However, that is just the start. Her story includes honor-roll achievements, national-championship titles, community awards, and more.

When I met her, I knew I had to learn her story.

A few years back Kelsee was like many high school students; she was trying to find her place in the world. She found herself not really having a "path" in life; her grades were not where she, or her family, wanted them. She had moved high schools and just kind of felt a little lost.

One evening, she and her mother were searching online for ideas of possible careers that she could pursue, or even be interested in pursuing. Her family was full of fire fighters, military members, and other public-service professionals. So naturally, the search started there.

Her Mom: Her Inspiration

In searching that evening, Kelsee stumbled across CAVIT's Web site. Looking through the programs, she immediately gravitated to the law enforcement and fire science programs. Her mother Lisa Brookes-Haws, a firefighter herself, became her inspiration and she decided to schedule an appointment to go down and check out the program.

When she arrived at CAVIT, she met Mr. Mike Berger, a fire science instructor. Mr. Berger showed her around campus giving her a "one-on-one" tour of the school, and most notably, the fire science classroom. At that moment, she made a decision that would set her course for her future. She enrolled in the fire science program.

She Becomes A Star

Kelsee started in her program in 2013. During her first year things started to change. Her grades improved (in both CAVIT and her high school), her focus increased, and as Kelsee stated, "I saw the path ahead." Her first year she made honor roll! She quickly started to distinguish herself as a leader in the program. She took on additional challenges, pushed herself, and became fire-science shooting star.

Then, Tragedy: But, Her Mom Became Her 'Fire"

Less than a year into the program tragedy struck; her mother passed away. To many students at her age this would have broken their spirits, but not Kelsee. She used it as "fire" to motivate her to succeed in her pursuit and become a firefighter just like her mom.

Fresh off her win at state, she traveled to Kentucky for the national competition, which is a huge deal. Kelsee ended up placing seventh in the nation for her job skill presentation - an accolade that very few high school students can ever claim.

Not to be one to rest on her laurels Kelsee also received community awards from the Arizona Medical Expo in Arizona City and for helping to install over 800 fire alarms in Casa Grande helping community family's increase their safety in the event of a fire emergency. Kelsee graduated from the CAVIT fire science program earning every single honor roll possible and became a certified firefighter in the State of Arizona

After graduating from CAVIT, Kelsee decided to serve her state and country and enlisted in the United States Army Reserve as a civil affairs specialist. Kelsee acts as a liaison to Foreign Nations for the Army and is charged with negotiations with host nations, community engagement, and outreach at the state, national, and international levels. She is honorably serving as a Private First Class with the 492nd Delta Company based in Buckeye, Ariz.

Inspired by her mentors during her time at CAVIT she decided she wanted to give back herself. She became the youngest person in Arizona (19 years old) to receive her Fire Instruction Certification. Now she spends her time helping to mentor and train other young men and women at CAVIT and in the community to become firefighters and increase their knowledge about fire safety.

In addition, she also received her Level II Fire & Life Safety Educator certification and will soon be testing for her Level III.

Her future is looking bright. Currently, Kelsee is pursuing her dream as a firefighter. She wants to work with the Scottsdale, Chandler, or Tempe Fire Departments and eventually one day make fire chief. She also is a state judge for the Arizona SkillsUSA organization, the very same organization in which she was once a competitor. In addition, she also started her own residential home care business, OZ Home Services, which provides maintenance, management, and oversight of Valley homes owned by seasonal residents.

When Kelsee is not striving to better her career, education, and her business she spends time traveling (she's been to seven continents!), off-roading in her truck, fishing, and golfing. She is truly an amazing person, loyal to her family, and a wonderful member of the CAVIT family. 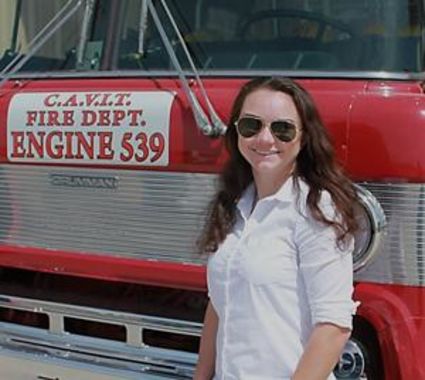 Students in the eleven area high schools can begin preparing for high-wage, high-demand occupations while still in high schools. CAVIT has programs for fire science, law enforcement, massage therapy, dental assisting, nursing, medical assisting, veterinary science, and cosmetology. Any junior or senior who has met prerequisites of an approved career and technology education may enroll.