Whichever Species Is Your Favorite, They Can Be Caught Now

The quality of life is measured by amount of time spent fishing.

Lake Powell is rising.   Spring runoff has begun a bit early due to warm days in March. That may change as another storm front is now on the way. Early runoff is a double-edged sword for fishing success from Trachyte to Good Hope Bay. This week, reports indicated good steady fishing success for smallmouth bass, walleye, stripers and largemouth. Catching was steady for those using bass jigs along the shoreline and trolling with wally divers and shad raps at 2.5 to 3 mph in open water.

Early runoff will "muddy the water" and have some impact on fishing success in the northern lake. Right now the mudline is in the vicinity of White Canyon/Trachyte.  The muddy water could move quickly downstream depending on the strength of the Colorado River inflow. Anyone headed to the northern lake will find good fishable water and good success in catching a wide range of species.

In the southern lake bait fishing was working better for stripers than most other methods.  Most anglers were finding success at the dam.  One reported suggested cutting an anchovy in half and hooking it on a 1/4 oz. leadhead. "Then cast the bait out about 50 to 60 feet into deep water and let it just drift down on its own arc controlled by the length of line out. By the time it gets to about 40 to 50 feet deep you'll get a good bite." The Wahweap fish cleaning station was busy every day with many fishing crews bringing in 20-30 fish to fillet.

My weekly trip was less productive than the previous trip.  This time we went to Last Chance to see if the schools there were cooperating. We found only a few striper aggregations that would respond to our trolled lures, but when we did we often doubled by tossing out a lure behind the hooked fish as it was reeled in.

We tried Buoy 25 cove on the return trip and found the shallow visible stripers still holding there but they were less aggressive than they were a week ago. Striper count there was only 12 fish with a total of 24 stripers filleted at the cleaning station.

We should have focused on Warm Creek where the best reports were coming from.  Large schools of stripers were in the back of the canyon past the floating restroom where bottom depth quickly changes from 60 to 40 feet. These fish were willing to hit diving lures attached to downriggers set at 40 feet. Graph a school and then drop a lure deeply to catch lots of fish. 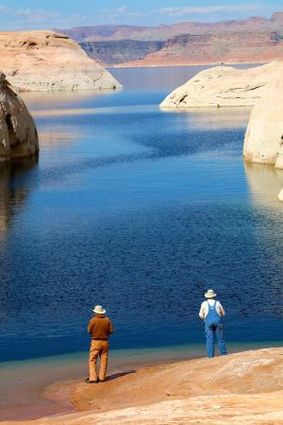 CRYSTAL CLEAR -- There are innumerable fishing spots on beautiful Lake Powell. This one had crystal clear water and visible stripers that would occasionally attack our lures. It reminded me of fishing for trout on a high mountain lake. There is some place and fishing technique to excite each angler in this amazing lake.

Right now you can choose which species of fish you wish to catch by using the technique best suited for that species.  Bass are in the backs of canyons and on rock slides in the main channel and main canyons anxious to find plastic grubs.  Crappie are hiding in certain spots with overhanging rocks or a submerged weed pile.  They like small plastic or hair jigs.

Stripers can be caught trolling, casting, and bait fishing.  Walleye are feeding at first light in the morning. They really like night crawlers near the bottom. A slow retrieve works best for them. Whichever species is your favorite, they can be caught now, lakewide, through the end of May.

It's time to go fishing at Lake Powell.

Editor's Note: At press time, lake elevation was 3594 and water temperature was 58-63F.