A giant fish tail, dark and maybe two feet in length, curled beneath the surface of the water.

Carson Pete, shore-fishing about 50 yards away, hiked to where he spotted the tail Sunday at Upper lake mary near Flagstaff.

He happened to have brought a heavy spinning rod with 50-pound braided line, a 60-pound fluorocarbon leader, and a 7/0 Gamakatsu circle hook. Just before the sun crawled beneath a horizon of pine trees, Pete grabbed a few frozen anchovies he'd dipped in a homemade fish oil/garlic mix and slid them onto the hook. Then he cast the bait near a brush line in 2 feet of water depth.

Immediately, a fish took the bait, drifted away - and then bolted. Pete said he set the hook three times as the fish peeled out about 60 yards of line during a cool and breezy evening. After about 20 minutes of wrestling and reeling, Pete got the huge fish to shore. Monday morning at the Arizona Game and Fish Department office in Flagstaff, the catfish weighed 33.36 pounds, measured 39 ½ inches in total length, and set an inland waters hook-and-line state record for channel catfish.

"Before I left, my 7-year-old daughter kept saying, 'You're going to catch a big fish. Send a picture when you do,'" said Pete, a Flagstaff resident who was targeting northern pike. "Well I saw a few people fishing for pike and no one was having any luck. So I just kept fishing and fishing."

As one reward for his persistence, Pete has quite the picture to send his daughter.

Pete broke the previous record by about one pound. That record belonged to Chuck Berndt of Sierra Vista, who caught a channel catfish at Parker Canyon lake that weighed 32 pounds, 4 ounces and measured 38 ¾ inches. Berndt caught that previous record fish in 1987. 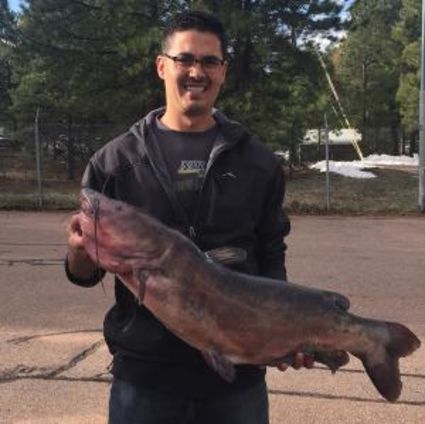 It is possible that Pete's catfish is as old as the record. "It is feasible that this new record catfish is 30-plus years old," said AZGFD Wildlife Specialist Scott Rogers, who helped weigh the fish. "The oldest on record for this species is 40. These slow-growing cats live a long time. Perhaps he was hatched the same year the old record was set."

With an elevation of about 7,000 feet, Upper lake mary has excellent springtime fishing and refreshing summertime temperatures.