From Tournaments To Teaching, He Enjoys It All

Gary Senft is an Arizona icon when it comes to bass fishing. I've been doing stories with him for decades, and he has a wealth of knowledge about techniques and tactics for catching Bass in our desert reservoirs. The amazing thing is, he doesn't try to keep this information to himself – he loves to teach other people about fishing.

Gary's mom and dad started taking him fishing when he was just a tyke - they'd hit the local lakes and ponds twice a month or so. The bass fishing bug took hold of him at the ripe old age of 8, when he bought his first crankbait at Yellow Front – it was a Heddon River Runt and the first Bass he ever caught took that bait at Boulder Creek at Canyon Lake. That bait is now framed and displayed at Senft's home at Roosevelt Lake. He kept fishing the local waters with his mom and dad until high school, then he started going alone and got a job so he could afford to fish.

Gary started at the U.S. Postal Service when he was 19 and he still works there. That's where he met outdoor writer J.B. Wagoner, who used to ask him about the fishing every time he came in. Gary ended up working on outdoor stories with JB for years, covering Arizona and California.

Pretty soon Gary was fishing small tournaments and doing those articles regularly, and that all led to a radio show for KOY one night a week, sharing his love for bass fishing and helping other fishermen learn how to bass fishing. His first big tournament was an AllStar Bass team tournament in 1992 and his partner was Kevin Finley. They were so happy with their $3000 winning check that they decided to keep doing AllStar. Gary joined Phoenix Bassmasters in 1993 and was elected president of the club in '94. A couple years later he started Junior Phoenix Bassmasters and that club is still going today, with 40-50 kids.

While all this was going on, Senft was also running a couple of tournaments a year for the Post Office employees. He also did shows with Wes Keyes on the Game And Fish's Wildlife Views programs, and many shows with David Jones and John Shaw's Fishing With the Good Old Boys. He is now partnered with Jones and they are doing videos for the YouTube channel Fishing with gary senft.

All Star Angler Of The Year

All this time he was still fishing tournaments including AllStar, Monterey, WON, etc. He won Angler of the Year five different times in the AllStar circuit. Right now, he is one of the pros at the Mesa Bass Pro Shops store, along with Matt Shura. They do seminars over there all the time, so if you'd like to learn more about Arizona bass fishing, go to the website and they have dates and times listed. Also, be sure to check out Gary's YouTube channel. He's a great teacher and a really good guy.

A drop shot is one of Senft's favorite ways to fish for Bass on just about any lake in Arizona. Right now, the fish are starting to move up for the spawn, so here's how to drop shot for them. A spinning rod and spinning reel are ideal. Gary uses 12-pound-test line, then ties on a swivel. To the swivel, he attaches a length of 8-pound-test. Slide a bobber stopper onto the line, then a 1/0 worm hook, and another bobber stopper. Tie a drop shot weight onto the end of the line. A drop shot weight is like a bell sinker, but usually cylindrical. Use a knife to round out the eye, or you can just go ahead and use a little bell sinker. Use the lightest weight you can get away with – max ¼ ounce. 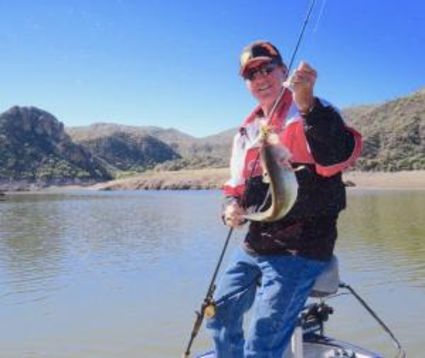 The bobber stoppers let you put the weight anywhere you want. Start out with about 12- to 14-inches between the weight and the hook. Just cast it out and let it sink to the bottom. Once it hits bottom and the line goes slack, gently reel up the slack so the line is taut, and just gently shake it. You don't want to lift the weight, you just want the worm (a 4-inch plastic worm is the usual bait) to gently wave around a bit. After a minute or so, gently pull the rod to move the rig a little, reel up the slack again, and start shaking. Usually you won't feel a bite – the rig will just be heavy when you try to move it. When that happens, just reel while pulling the rod to the side. Don't rear back like the guys on TV or you'll rip it out of the fish's mouth. If you get snagged, you can usually get free by giving it a little slack and shaking it good and hard.

Good worm colors on arizona lakes are Aaron's Magic, Morning Dawn, green pumpkin, and pumpkin seed. Yamamoto 4-inch worms are awesome. So are Berkley Power Worms and Roboworms. Gary uses Bass Pro Shops rods and reels, and also their line. It's not as expensive as some of the big name brands, and it's great line.