Don McDowell Is 'The Bass Daddy' - And So Much More

Many of you know Don McDowell as the host of the extraordinarily popular and award-winning radio show "Shake, Rattle, and Troll", which airs each Sunday on KFNX 1100 AM from 7 to 9 a.m. and on Internet Radio at http://www.shakerattleandtroll.com. 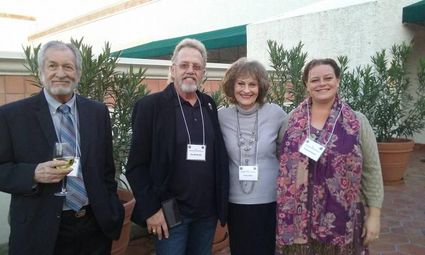 AZGFD AWARD WINNERS - Jim and Carol Allen, "Writer[s] of the Year" are shown with their friend Don McDowell, "Advocate of the Year - Federal". Carol's daughter, Chelle Brookes, was a guest at the award banquet January 14.

McDowell is a professional Bass angler, a saltwater charter master, a member of the United States Coast Guard, a hunting enthusiast, and, of course, a radio personality. He is a powerful advocate for fishing, hunting, conservation, and veterans as well as an outspoken watch dog of the American political scene.

His mission statement highlights his goal: to expose his sponsors' products and services to a serious marketplace while promoting good sportsmanship. His passion for the outdoors, coupled with his extensive professional sales and marketing experience, has made him a natural for the highly competitive world of bass fishing and performance Bass boats.

In addition to awards from the Arizona Game & Fish Department for "Media of the Year", he was recognized in January as their "Advocate of the Year - Federal".

The energy and sincerity of this man and the success of his business are stellar.