Matt Shura At Saguaro: This Versatile Angler Is 'Good People'

I've known Matt Shura since he was just a kid, and he's been a heck of a stick all that time. He started out catching bluegills at a pond at Power and Guadalupe with his dad when he was about five or six years old. That first bluegill had him hooked for life.

Going to the lake? Check out the lake level at http://data.hydrometdataservice.info/dwr/

Then he started watching bass fishing on television, and he was fascinated. By age ten he had his first boat - a ten-foot jon boat with a trolling motor. One windy trip on san carlos convinced him that a bigger boat was in order, though.

Matt started fishing tournaments in 1989 - a WON Bass at Roosevelt. He was still in high school at the time, and was awed by fishing against the anglers he looked up to - guys like John Murray, Gregg Warne, and Butch Vasco.

Todd Herman told him about AllStar Bass and Matt started fishing the pro-ams as an amateur. He says he learned a ton by watching the pros he fished with and asking questions. Matt actually held the state record for Largemouth Bass for a time, with a 15.86-pound fish he caught at Canyon Lake on a spinnerbait. The fish was right on the bank near the marina, he says, and he actually missed it the first time it bit.

"When I was in junior high, I met Floyd Preas at Nevitz Marine," Shura says. "At the time, all I had in my tackle box was a Shad Rap. Floyd taught me how to split-shot, and I've been catching fish on it ever since."

He was also helped along by Brad Cook at Happy Hooker Tackle Shop. In those days there was no Internet, so newbies depended on seasoned anglers to help them. Brad took him out and showed him how to fish Westy Worms, and they fished AllStar teams together for a year. He learned structure fishing from Steve Foutch.

All these mentors and more gave him the knowledge for fishing both shallow and deep. One of the things that makes Matt such a great fisherman is this versatility. He's not one of those guys who has a favorite bait he throws all the time - fishing tournaments have made him a well-rounded angler who is confident with just about any technique.

Currently, Matt is fishing Wild West Bass teams and pro-ams, the FLW Costa series at Havasu, the WON Bass at Clear Lake, and the US Open at Mead. He'll also fish local tourneys like Bass Junkiez and Monterey Bass when he gets a chance - Matt has been a firefighter full time since 1985. Actually, he's an engineer and a paramedic, so he gets to save people and drive the truck!

He and Johnny Johnson just won the American Bass Championship and received a Ranger RT188 aluminum boat. He has also won the Clear Lake Open and All Star Angler of the Year, in addition to numerous top-ten finishes in the US Open.

I've fished with Matt on a number of our arizona lakes, but our most recent trip was to Saguaro to fish some Reaction Innovations Little Dippers. These small swimbaits often produce when topwater baits and jerkbaits won't. You don't have to give them any action - the way the tail is wedged, it has the perfect amount of action on its own.

It's a subtle action that mimics a Shad swimming. One of the reasons that Matt likes these little baits so much is that you can cover so much water so quickly. He says he can make five retrieves with a Dipper in the time it would take him to throw and retrieve a Spook just once.

The key to these baits is to choose the color that will match the baitfish on the lake you are fishing. Out West, that is mostly clear and Shad colors, with hints of purple, blue, or green.

The Little Dippers have a slot for the business end of the hook to sit in, which makes them completely weedless. They are perfect for throwing into reeds and stick-ups, and they are awesome worked over skinny water. Matt likes to crank just fast enough to keep them right under the surface, leaving a V-shaped wake behind them.

It isn't unusual when you're fishing this bait to see the fish following it. When this happens, most people want to slow down, but Shura says that's a mistake. The best thing to do is speed it up - he says this triggers bites because the Bass thinks the bait is getting away. If speeding up doesn't do the trick, kill it and let it fall. Often this is all it takes to make the Bass suck it in and head for deep water.

Another thing you will see is that once you have a Bass on the line, other Bass will be behind it, following. This, says Matt, is a sure sign that you should stay and fish the spot thoroughly, maybe even throwing a Senko around. 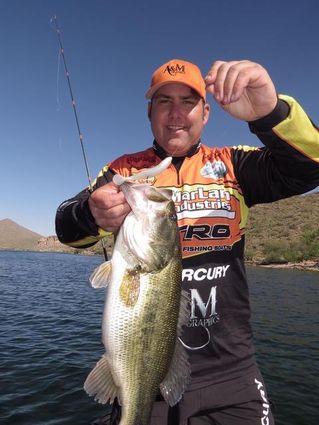 GOOD CATCH - Matt Shura is shown with a nice bass caught at Saguaro Lake on a Little Dipper.

For the smaller (4-inch) baits, Matt uses a medium-action spinning rod with 10-pound-test braid. He ties on about a 6-foot leader of 8-pound-test fluorocarbon. You want the leader to be just long enough to have the knot be just above that first big guide on your spinning rod when the lure is reeled up to throwing position. If you make the leader too long, that knot will smack against that first guide over and over, potentially weakening the line.

Matt actually learned about these baits from one of his non-boaters who was catching fish on them like crazy. He's always eager to learn new things, and he also pays it forward by teaching at Bass Pro Shops (http://www.basspro.com/) seminars at the Mesa store and is always being willing to help out fellow fishermen, even strangers.

If you see his bright orange Nitro on the water, don't hesitate to stop and say hi. Matt Shura is good people!