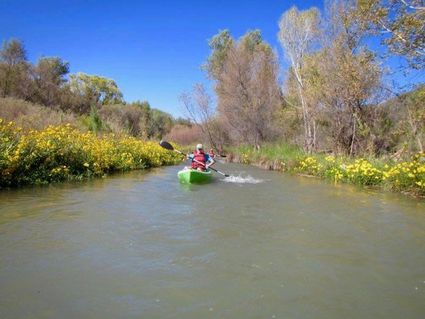 Trinity is in a "sea" of flowers.

If you have been reading my stories here on Arizona BOATING & Watersports and Western Outdoor Times for long, you know that my husband John and I love to go outdoors adventuring with our granddaughters. We've been taking them fishing, hiking, shooting, exploring, and hunting almost since they could walk, but we had never been kayaking together until yesterday.

I found a Groupon for the Clarkdale Kayak Company and it was such a bargain I signed up the four of us. First off, let me tell you that I did not tell the kayak company that I'm an outdoor writer, and we did not get any special treatment or discounts aside from the Groupon that anybody could get. So, when I tell you that we had an absolutely incredible time and had the friendliest, best guides ever, that's nothing more than what you will get if you go out with them.

A Little Café In Clarkdale

The headquarters is in a little café in downtown Clarkdale, with the kayak check-in on one side and the café on the other. There were a dozen or so people in our group, and we all piled in a van and were driven to the river. They give you a dry sack to use so you can put your phone and wallet and keys and all that inside and keep them safe. There is a zipped compartment behind you in the kayak so even if you tip over (I didn't!), your stuff is safe and sound.

I brought a waterproof camera with me, but even that isn't necessary, because the guides take bunches of photos on the river, especially as you're going down the rapids, so you can just relax and have a good time and get the photos from Facebook later. In fact, the ones from our trip were up within just a couple of hours.

Not Just A Serene Paddle

I guess that what I expected was a serene paddle down a sort of a pond-like waterway, but it was not like that at all. We went through several rapids, and even though they were all class 1, they were exhilarating. Melissa, one of our guides, had us all gather before each rapid, and told us what to expect and how to take the rapids.

I think a couple people in our group tipped over and fell in, but the water is shallow so all you have to do is stand up and get out of the river. We actually went down quite a few rapids, and at one point we all got out of the river and had a break while Melissa and Cameron slid the boats down a little metal ramp so we could all get past the diversion dam.

The rapids may sound scary, but they actually are just really fun. The guides are right there - on the two most technical rapids, they actually got out and stood in the river so they could show you where to paddle and help you out if you were in the wrong place. It's very encouraging to hear them hollering out praise as you bob past, too - Cameron actually told me I was an expert level paddler - either that or just really darn lucky. I chose to take that as a compliment!

The river itself is gorgeous, and by complete accident, we managed to have our trip during the two to three weeks when the yellow flowers were blooming everywhere along the river. It was absolutely splendid. Huge trees line both banks along most the trip, and there are birds and butterflies everywhere. Cameron says they often see otters, but we didn't see them on our trip. Cameron was great to talk to - he told us a lot about the river and the animals he's seen along it, and he's just a great guy and a blast to be around.

They include a water cannon in your kayak, so John and I and Trinity and Emily had a heck of a water battle, and I think Grandma and Grandpa won. It was just a glorious day in the outdoors, and I highly recommend you book a trip soon - you will love it.

The kayaks are limited to 250 pounds, and they hold one person each. The Web site says that unless you are booking with a child, everyone gets a single-occupant kayak. These are the kind you sit on top of, not the kind with the hole that only your upper body pokes out of.

They fit you with a life jacket and explain how to paddle, and when you first get in the river it, it is in a nice quiet pond where everyone gets to practice. The only physical limitations besides weight is that you need to be able to paddle for at least a couple of hours, and you have to get out of the kayak, which means standing up from almost sitting on the ground. Trinity got a blister on her hand from paddling, but Cameron had Band Aids, so that was our only casualty. The girls loved the trip, and so did Grandpa and I.

The regular prices are $86.40 per adult, $43.00 per child 4-12. There is also tax of 9.35 percent, and a town of Clarkdale permit fee of $5.50. You should wear clothes that dry quickly - I recommend the long sleeved fishing shirts with UPF built in. Also, be sure to wear a hat and sunscreen. They give you cold water. The trip is about three and a half miles, and takes around two and half hours, three and half hours if you include getting to and from the river and the headquarters. You may want to bring a dry set of clothes and shoes for the trip home.

Cameron And The Company 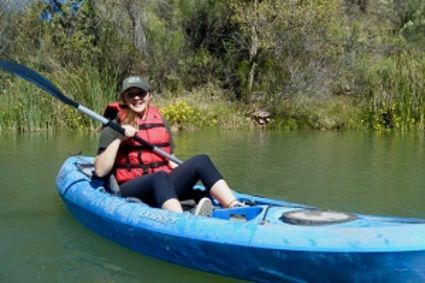 Emily is obviously having a really good time - and quite the upper-body workout too!

Cameron told us he had never been on the river until he got a job as a guide, but I have him beat because I've never kayaked the Verde before, and I'm an Arizona native! I wish I hadn't waited so long - I didn't have any idea how beautiful it is and how much fun it is. I highly recommend you book with the Clarkdale Kayak Company soon. This is their first year in business, so they're not sure how late in the year they will continue the trips. At the headquarters, they told me they'd probably keep going as long as people want to sign up. Getting wet was fun even in October because that Arizona sun is nice and warm.

To book a trip, call Clarkdale Kayak Company at 1-800-478-4711 or go online at http://www.clarkdalekayak.com. Don't forget to check Groupon for deals before you call!