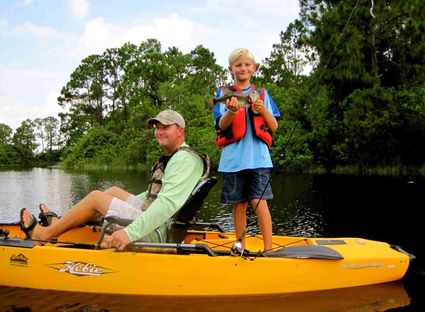 While shore and motorboat fishing still lead the way, kayak fishing is rapidly growing in popularity as more and more anglers make the shift to the "Tupperware Navy".

The most recent national data suggest close to 2 million anglers go out on kayaks each year, as more kayak brands introduce wider, more-stable platforms from which anglers can test their skill against even large ocean-based fish, such as marlin, tuna and grouper.

According to Dallas Shewmaker, owner of LowerGear Outdoors, an Arizona-based kayak and camping-gear retailer with locations in Tempe and Lake Havasu, the growth can be attributed to a number of factors.  "The cost of entry into kayak fishing is well below any motorized craft.  Maintenance costs are minimal; transportation is much easier, and you can get into areas that are off limits to power boats. Most find kayak fishing a more thrilling, up-close-and-personal experience with the target."

There are many brands and models available to choose from, price points starting at around $500.  Added features as you go up the price ladder to $3500 or more are better tracking, better surface areas for fishing accessories, and foot and even motor propulsion systems.

Shewmaker says the foot-propulsion models outsell the "paddle-only" models by nearly 100 to 1 at his stores.  "We carry Hobie and Native Watercraft models that are traditional paddle kayaks, but once an angler demos or rents a foot-propulsion model and realizes the many benefits that offers for a quality fishing experience, in most cases they prefer the drive-and-rudder system despite the increased cost."

Popular kayak fishing trips in Arizona include going after Bass in some of the Salt River lakes (Saguaro, Canyon and Apache), and trout in The Rim lakes east of Payson.  These days a kayak can be outfitted with accessories that rival the big boats - foundations are included with many models or can be easily added to accommodate fish finders, livewells, all types of rod holders, cameras, GPS units and even sails.

Non-motorized fishing tournaments are gaining in popularity as well, with many online, regional and local options.  Prize opportunities to winners at major tournaments are already well into five-figure territory as national brands get into sponsorships.

Locally, there are several competitive events each year in the Phoenix and Havasu areas, and there are many informal get-togethers where bragging might be backed up by a few side bets.  Shewmaker advises LowerGear will be announcing a few event dates for 2017 in the next few weeks, catering to those starting out as well as more experienced anglers.

For those wanting to give kayak fishing a try, Shewmaker has these suggestions:

• If you're on a tight budget, invest that in a good used model, rather than buy new.  A $500 kayak will float, but there's a reason it's only $500 at the store.  Try finding a used $1000 kayak at a private sale for $500 and expect to enjoy better stability and tracking and easier fishing.  If you want a used Hobie in particular, be prepared to act fast; used ones can sell within hours of posting.

• If buying used, ask the seller if you can fill up the hull with water to check for leaks.  If water can get out, it can get in.

• Talk to your dealer about the pros and cons of various models and about what is best for you. There is no such thing as the perfect boat for everyone.  Variables include your budget, your height and weight, transportation options, intended use, and your comfort in water environments.  Narrow it down with research, and then go for a demo ride. 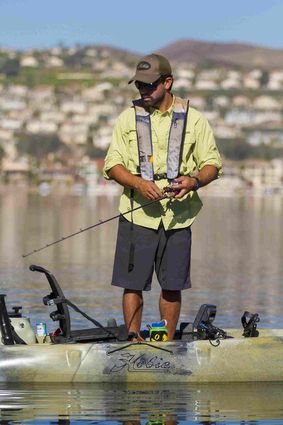 • Set aside some of your budget for accessories. The most frequently purchased add-on items at LowerGear are the wheel carts for one-person carrying, universal rod holders, fishing-gear holders of various types, and upgrades in rudders and propulsion fins.

• Be safe out there. State regulations require a life vest on board, and common sense says wear it!  A mounted flag helps mitigate visibility issues for pilots of fast boats, and a white light is required after dark.  Practice getting back into an overturned kayak in a pool or shallow water; don't make your first effort one in a real emergency.