An annual survey of the Mount Graham red squirrel recently revealed a slight decline in the number of the endangered squirrels in the Pinaleño Mountains in southeastern Arizona.

The survey conducted jointly by the Arizona Game and Fish Department, Coronado National Forest, U.S. Fish and Wildlife Service and the University of Arizona estimated 252 squirrels. The survey is a decrease of 11 squirrels from the 2015 estimate of 263.

"While we'd prefer to see squirrel populations continually grow, it's not uncommon for them to fluctuate considerably from year to year," said Tim Snow, AZGFD terrestrial wildlife specialist. "At this point, we aren't immediately concerned with the lower squirrel numbers. We remain optimistic that our efforts are working to ensure the population has the best opportunity to flourish in the future."

The red squirrel survey is conducted each fall by visiting a random sample of known middens, which are areas where red squirrels store their pinecones. Mount Graham red squirrels live only in the upper elevation conifer forests of the Pinaleño Mountains and feed primarily on conifer seeds. Females produce two to seven young per year. 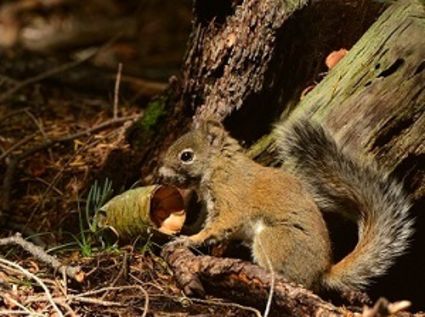 The species was declared endangered in 1987. The Mount Graham red squirrel population peaked at about 550 animals in the late 1990s, but typically ranges between 200 and 300 individuals.

Conservation of the species is guided by the Mount Graham Red Squirrel Recovery Team, a partnership that includes the Coronado National Forest, Arizona Game and Fish Department, U.S. Fish and Wildlife Service, University of Arizona, The Phoenix Zoo, Native American tribes and others.