On a long wall, a hygienic 12-foot-long stainless-steel counter is where the work gets done today. Two biologists stand over the counter immersed in their labors that involve isopropanol, forceps, test tubes and scalpels. They are here to assay the health of fish held at this federal facility.

Every Effort Is Made

Every effort is made to ensure that fish brought into national fish hatcheries - and the fish going out - are robust and disease-free. Toward that goal, Marlene Rodarte and Ashlie Peterson, fisheries biologists from the U.S. Fish and Wildlife Service's Southwestern Native Aquatic Resources and Recovery Center - Fish Heath Lab recently collected razorback sucker and rainbow trout tissues for the annual exam at Willow Beach.

The two scientists own a combined 42 years of experience in fish health, and laboratory practices. They are two among a staff of six fish health biologists at Southwestern ARRC, led by a doctor of veterinary medicine, Martha Keller.

Based In New Mexico

The Southwestern ARRC is based in Dexter, NM, in the southeast part of the state near the more recognizable cities of Roswell and Carlsbad. That's where scores of processed fish tissue samples taken for this annual check-up will be further examined. The Southwestern ARRC houses the fish health lab, a molecular genetics laboratory and is the largest native species fish culture program in the Southwest. The Southwestern ARRC conserves 15 threatened or endangered species and conducts research on four-to-six additional species of concern.

What Rodarte and Peterson endeavor to do here is akin to your annual check-up. It's preventative medicine. Following a protocol expected of all 71 national fish hatcheries, the rainbow trout and razorback sucker are tested every year for a selection of diseases.

Rainbow trout were recently brought back to Willow Beach National Fish Hatchery following a three-year hiatus caused from a serious structural failure that interrupted its water supply. A new water intake was dedicated in October 2016, welcoming back the popular sports fish to the 57-year-old facility that sits 12 miles downstream of Hoover Dam on the Arizona side of the Colorado River.

The razorback, so named for a prominent ridge on its nape is endangered with extinction. It's native to the Colorado River and its larger tributaries and the hatchery is part of a large endeavor to improve the fish's conservation status. The sucker with a belly the color of a wet lemon and sides ruddy like the flesh of a blood orange is curiously shaped for a life in fast-flowing water; the 'razorback' is a keel that keeps the fish oriented upright and on the river bottom in otherwise sweeping flows.

As a matter of good science protocol, fish health practitioners follow rigorous and repeatable methods to collect fish tissues. There's much work at a laboratory bench examining kidneys and spleens and in the case of trout, skulls reduced to a granular slurry to be examined with much time over a high-powered microscope. Obviously the fish must be sacrificed to examine internal tissues and those sacrifices are kept to a minimum. Sacrificed fish are bathed in a compound called MS-222, a piscine Prozac of sorts, an FDA-approved anesthesia that humanely dispatches the animal.

The time investment to assay wild or hatchery fish populations is quite large. Tissues are collected and processed and shipped to the laboratory in New Mexico. From start to finish, from gathering fish to looking at fish tissues through scopes to the having final data for Dr. Keller to report to fisheries managers, an annual hatchery exam may take on the order of 120 hours to complete. One always hopes for a clean bill of health, but in the event that disease pathogens are found, Dr. Keller offers potential remedies or treatments. 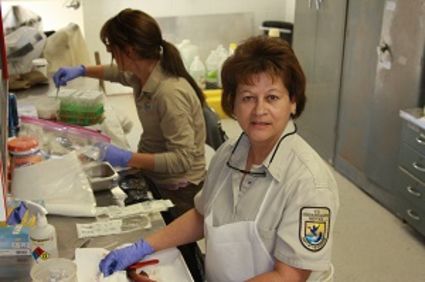 Rodarte and Peterson have seen the Southwest like no others. Shortly after visiting Willow Beach on the Arizona-Nevada border, their work took them to the legendary Lake Fork east of Dallas, Texas, a fishery known for growing massive largemouth bass. The fish health program services nine national fish hatcheries as well as the state game and fish departments in Arizona, New Mexico, Oklahoma and Texas. They have examined alligator gar and largemouth bass, Gila trout and Apache trout, Texas blind salamanders and some of the rarest fishes in the world, all with an eye on finding diseases.

They've seen peculiar things in the bellies of fish, like song birds and field mice. Despite handling fish day after day, they both still enjoy angling and hunting.

And they do ferret out disease-causing pathogens. The work is essential to fisheries conservation, be it common game fishes such as rainbow trout or the imperiled sucker with the curious ridge on its back. No matter the species, understanding the health of captive or wild fishes is necessary to make informed management decisions.