Powell Fish Are In Transition Mode

Lake Powell fish are in transition mode with day length getting shorter while air temperature is cooling. Water temperature and lake elevation have stayed stable during the past three weeks. Elevation is 3610 and temperature holding at 70 degrees. The main change is fish location.

Bass are moving up on shore, Stripers are on the move and Shad are split between hiding in the backs of canyons while some are going deep in open water. My best advice is to keep an open mind and an eye on the graph. The best fishing may be found in an unsuspected location that is not normally a good fishing spot.

Recently it was suggested that Bass were moving up on shore in the upper 15 feet of water. A report from the Salt Lake City Bass Masters confirmed their anglers found large and smallmouth Bass by tossing dark-colored jigs near big rock reefs in 15-20 feet of water from Good Hope to Halls Creek. Winning weight for 10 fish in two days was 25 pounds with big fish 4 pounds -14 ounces.

I found similar results in the southern lake by targeting small isolated rock slides sticking out on otherwise high cliff walls. It is almost too easy to look down the main channel or canyon and see a small (less than 30 yards wide) white rock slide. Drop-shotting a shad-shaped worm worked great but success was equal with a smoke or black colored single tail grub. Larger Bass were found on rock slides while open water reefs were populated with yearling Bass.

Another tagged walleye was caught, this time in Halls Creek near the gravel island in the middle of the bay. Bryan Stanton reported catching a surprising number of walleye and smallmouth Bass in Halls on Oct 16th. His prize was a $50 gift certificate from Sportsman's Warehouse.

Stripers Are Where You Find Them

Stripers are where you find them. Deep schools were reported in the back of Rock Creek from 60-90 feet. They were caught on silver spoons, both plain and hammered varieties. These fish were still below the oxygen depletion zone.

There are shallower striper schools roaming and looking for Shad. This week it seemed that my graph showed no fish traces for extended periods of time and then would light up with fish traces in isolated locations. Surprisingly, one of the best spots was near Lone Rock in Wahweap Bay. This spot has not been great all year and then the fish suddenly appear. We will see how long they stay before moving on.

Other good locations were in Labyrinth Canyon about three turns in from the main channel. Padre Canyon and Kane Creek were much less productive this week than last. Trolling near Neskahi Canyon in the San Juan was another bright spot for big Stripers. There are still Stripers roaming in the shallow water on the Great Bend. 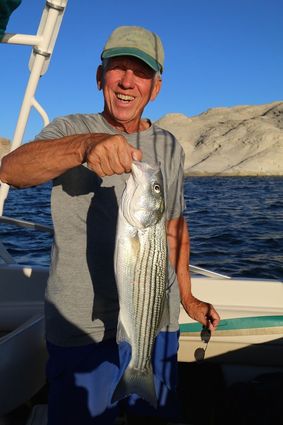 A 'LUNKER' -- Tom Tuthill, New Jersey resident, caught his first-ever striped bass while trolling in Wahweap Bay near Lone Rock.  He said it was a "lunker" compared to the sunfish he catches in lakes he fishes in his home state.

My best advice is to pay attention to the events occurring at your lake location. Try trolling shallow in the backs of canyons and coves. Then move out deeper and try spoons at 60 – 90 feet where fish traces are found layered in the deep water. If Stripers are not found then try for Bass in the shallows near rock slides. Walleye can be targeted by adding a bit of night crawler to a Bass jig or spoon and slowing down the presentation.

Lake Powell weather is still great with warm days and cool nights. Fish are active and angling success will peak in the next two weeks as water temperature hits the mid 60s.