NPS Presence In Just One State - Arizona Has Them All

From Monuments To Memorials, From Parks To Trails, And More 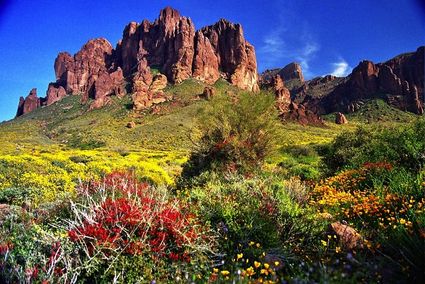 These memorable destinations are enough to fill a lifetime of "bucket lists".

As we celebrate the centennial of the National Parks Service, many will be visiting national sites throughout the country. A good place to start is here at home as Arizona has over two dozen of these spectacular destinations within the state.

For nearly 5,000 years, people have lived in these canyons - longer than anyone has lived uninterrupted anywhere on the Colorado Plateau. In the place called Tseyi, their homes and images tell us their stories. Today, Navajo families make their homes, raise livestock, and farm the lands in these canyons. The National Park Service and Navajo Nation actively work together to manage park resources.

Explore the mystery and complexity of an extended network of communities and irrigation canals. An Ancient Sonoran Desert People's farming community and "Great House" are preserved at Casa Grande Ruins.

A "Wonderland of Rocks" is waiting for you to explore at Chiricahua National Monument. The 8-mile paved scenic drive and 17-miles of day-use hiking trails provide opportunities to discover the beauty, natural sounds, and inhabitants of this 11,985 acre site. Visit the Faraway Ranch Historic District to discover more about the people who have called this area home.

It was a journey of conquest, filled with exploration, wonder - and cruelty. Inspired by tales of vast cities of gold, 339 European soldiers and over 1000 Aztec allies embarked on an epic journey through arid deserts and rugged mountains. They brought rich traditions and new technology into the region, irrevocably changing the lives of native peoples and continuing to influence the area today.

Fort Bowie commemorates the bitter conflict between Chiricahua Apaches and the U.S. military - a lasting monument to the bravery and endurance of U.S. soldiers in paving the way for settlement and the taming of the western frontier. It provides insight into a "clash of cultures," a young nation in pursuit of "manifest destiny," and the hunter/gatherer society fighting to preserve its existence.

Lake Mead NRA offers year-round recreational opportunities for boating, fishing, hiking, photography, picnicking and sightseeing. It is also home to thousands of desert plants and animals, adapted to survive where rain is scarce and temperatures can soar.

Unique combinations of geologic color and erosional forms decorate a canyon that is 277 river miles (446km) long, up to 18 miles (29km) wide, and a mile (1.6km) deep. Grand Canyon overwhelms our senses through its immense size At present, all South Rim roads are open, and the North Rim is open for the season.

Did you know that Petrified Forest is more spectacular than ever? While the park has all the wonders known for a century, there are many new adventures and discoveries to share. There are backcountry hikes into areas never open before such as Red Basin and little known areas like the Martha's Butte. There are new exhibits that bring the stories to life. Come rediscover Petrified Forest!

Tucson, Ariz., is home to the nation's largest cacti. The giant saguaro is the universal symbol of the American west. These majestic plants, found only in a small portion of the United States, are protected by Saguaro National Park, to the east and west of the modern city of Tucson. Here you have a chance to see these enormous cacti, silhouetted by the beauty of a magnificent desert sunset.

The "Monument" is located on the Gila River Indian Reservation and is under tribal ownership. The Gila River Indian Community has decided not to open the extremely sensitive area to the public. There is no park brochure, passport stamp, picture stamp or other free literature available.

Today we gaze through the windows of the past into one of the best preserved cliff dwellings in North America. This 20 room high-rise apartment, nestled into a towering limestone cliff, tells a story of ingenuity, survival and ultimately, prosperity in an unforgiving desert landscape. Come marvel at this enduring legacy of the Sinagua culture and reveal a people surprisingly similar to ourselves.

The prehistoric Puebloan Ancestors built Tsegi Phase villages within the natural sandstone alcoves of our canyons. The resilient Ancestral Puebloans paved the way for current Native American groups in the Southwest region. These villages, which date from AD 1250 to 1300, thrill all who visit with original architectural elements such as roof beams, masonary walls, rock art, and hand and foot holds.

Look closely. Look again. The sights and sounds of Organ Pipe Cactus National Monument, an International Biosphere Reserve, reveal a thriving community of plants and animals. Human stories echo throughout this desert preserve, chronicling thousands of years of desert living. A scenic drive, wilderness hike or a night of camping will expose you to a living desert that thrives.

Parashant provides a sense of solitude to those who venture into its isolated domain. The Monument's expansive landscape encompasses a chronicle of natural and cultural history that is just waiting to be discovered. For those prepared and equipped to explore the largely undeveloped landscape, a trip into the Parashant is a journey into the wild.

American Indians, Mormon ranchers, plants, animals, and many others have depended on the life-giving water found in the beautiful desert oasis at Pipe Spring. Learn about pioneer and Kaibab Paiute life by exploring the museum, historic fort and cabins, garden, orchard, and Ridge Trail. Visit with rangers and ranch animals, and attend living history demonstrations and talks.

Sunset Crater Volcano! Roughly 900 years ago, the eruption of this volcano reshaped the surrounding landscape, forever changing the lives of people, plants and animals. Hike the trail through the lava flow and cinders and you'll likely discover colorful, ruggedly dramatic geological features coexisting with twisted Ponderosa Pines and an amazing array of wildlife.

Crowning a desert hilltop is an ancient pueblo. A child scans the desert landscape for the arrival of traders. What riches will they bring? What stories will they tell? From the rooftop of the Tuzigoot pueblo it is easy to imagine such a moment. The pueblo shows us this ancient village built by the Sinagua people. They were farmers and artists with trade connections that spanned hundreds of miles.

Come gaze across curved canyon walls! Among the remarkable geological formations of the canyon itself, the former homes of ancient inhabitants are easily evident. Along the trails you can imagine life within Walnut Canyon, while visiting actual pueblos and walking in the steps of those who came before.

Nestled between the Painted Desert and ponderosa highlands of northern Arizona, Wupatki is a landscape of legacies. Ancient pueblos dot red-rock outcroppings across miles of prairie. Where food and water seem impossible to find, people built pueblos, raised families, farmed, traded, and thrived. Today, if you linger and listen, earth and artifacts whisper their stories to us still.

The squeaky wooden floor greets your entry into the oldest operating trading post on the Navajo Nation. When your eyes adjust to the dim light in the "bullpen" you find you've just entered a mercantile. Hubbell's has been serving Ganado selling groceries, grain, hardware, horse tack, coffee and Native American Art since 1878. Discover Hubbell Trading Post NHS, where history is made every day.

"Everyone mount up!" was the rousing call from Juan Bautista de Anza. In 1775-76, Anza led some 240 men, women, and children on an epic journey to establish the first non-Native settlement at San Francisco Bay. Today, the 1,200-mile Juan Bautista de Anza National Historic Trail connects history, culture, and outdoor recreation from Nogales, Arizona, to the San Francisco Bay Area. 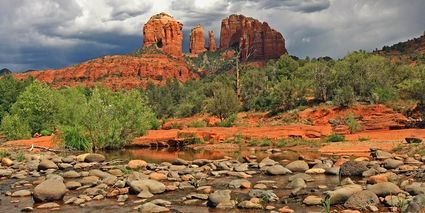 Follow the routes of mule pack trains across the Southwest on the Old Spanish National Historic Trail between Santa Fe, New Mexico, and Los Angeles, California. New Mexican traders moved locally produced merchandise across what are now six states to exchange for mules and horses.

Tumacácori sits at a cultural crossroads in the Santa Cruz River valley. Here O'odham, Yaqui, and Apache people met and mingled with European Jesuit and Franciscan missionaries, settlers, and soldiers, sometimes in conflict and sometimes in cooperation. Follow the timeworn paths and discover stories that connect us to enduring relationships, vibrant cultures, and traditions of long ago.