Stripers, Bass, Walleye,Panfish Are All Ready To Be Caught 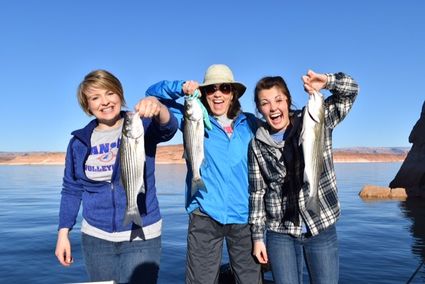 EXCELLENT FISHING -- The Russ Muir family girls really caught the stripers on their last trip to Lake Powell.  Despite the hot weather fishing still remains excellent at the picturesque lake.

Stripers have moved out of the main channel and toward the backs of canyons. The move indicates that the Shad food source has been well used in open water of the channel and bays. Slurping Stripers have been relentless in pursuit of small newly-hatched Shad.

Those Shad that have survived are seeking a sanctuary in the brush that now lines the shoreline.  Shad have a better chance of avoiding predation if there is some kind of brushy cover available. Shad are clever but Stripers are hungry.  Stripers keep searching and moving until more Shad are found.

The prime Shad striper battleground is now found in short U-shaped coves near the main channel or main bay. Shad move into coves to look for brush while Stripers guard the mouth of these coves to prevent Shad from escaping. Search for striper surface activity at first light in the morning.  Top water lures are working well when any surface action is seen. Shallow running crankbaits and Kastmaster type spoons work well when cast into active boiling fish.

If surface feeding Stripers are going down quickly try to locate the retreating school on the graph. These flighty fish are hungry and will eat a shad-like offering while they are down at 30 feet under the boat.   One sure fire technique is to drop a rattletrap type lure into the deep school and then reel it up through the school as the fish reorganize and get ready for the next surface burst.

Striper boil fishing is best from the San Juan north, but a slurping boil can be seen anywhere.  In the southern lake bait fishing is king. Huge catches are still being reported along main channel walls particularly where these walls meet a rockslide, rock pile or shallow boulder field. Hungry main channel Stripers stay deep to stay cool but periodically come shallower (20 feet) to look for crayfish on rocky structure.

bass fishing is slower in the heat of summer.  Largemouth Bass are tucked in the comforting arms of abundant submerged brush. Smallmouth Bass have gone deeper than most anglers prefer to fish. It is much better to get the bait down to 30-50 feet now than to fish along the shallow shoreline.

The surprise fish right now is the walleye.  They are still hungry despite the abundant Shad spawn.  Walleye are found in the U-shaped canyons where Stripers and Shad are competing. They are in shallow shoreline habitat where one or two trees attract sunfish. Walleye really like to eat small sunfish.

Slow rolling spinnerbaits, worm-tipped plastic grubs or tubes, and slow trolled bottom bouncers with worm harnesses are all working right now.  More walleye have recently been tagged from Wahweap Bay to Dungeon Canyon in the southern lake.  The greatest numbers of tagged walleye are found near Bullfrog Bay.  Remember the tagged walleye contest is still going on and we are looking forward to awarding our second prize to the next lucky angler to catch a tagged walleye.

There are many coves now that contain tumbleweed piles, tamarisk trees and other brush.  In each of these coves a school of panfish can be found and caught.  Bluegill, and green sunfish are abundant and getting larger than in recent years.  Perhaps the sunfish in the southern lake are increasing in size due to the opportunity to eat quagga mussels. Our food habits investigations have determined that panfish are eating mussels.  These larger sunfish can be caught well on a live worm by a small child.