On July 11, Boat Owners Association of The United States (BoatUS) President Margaret Podlich (L) and Government Affairs Manager David Kennedy (R), delivered over 24,000 comments from recreational boaters to epa Headquarters in Washington DC to urge the agency to stop adding more ethanol to the nation's gasoline supply. BoatUS had asked the BOATING public to add their voice to a proposal to increase the amount of ethanol that must be blended into the nation's gasoline supply for 2017. If adopted, these proposed levels will require the use of a record amount of ethanol, forcing higher-level ethanol fuel blends (including E15 or 15% ethanol) into gas pumps and at more gas stations. "A sticker on the pump mixed in with all the other labels may be the only warning for E15 gasoline," said Podlich. Most marine engines are built to only work with up to 10% ethanol, and it is illegal to use gas containing more than 10% ethanol in any marine engine. The national BOATING advocacy, services and safety group has voiced its concern for the significant potential for misfueling, putting boaters at risk by using fuel that will damage their engines. 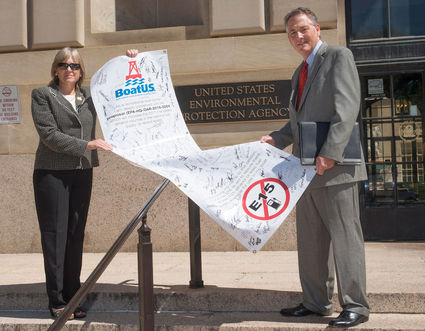