I have to eat my words "trout fishing in Arizona sucks". I have been spoiled by fishing states like Montana and Utah for trout in double digits. However, a friend, John Waters caught this amazing trout in an undisclosed stream in Arizona. 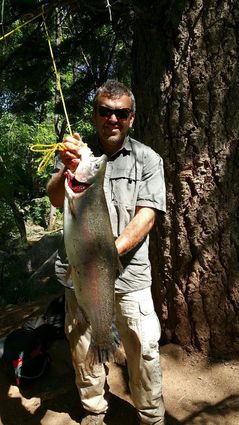 ARIZONA AMAZEMENT - Experienced angler Mike Wallace says, "I have to eat my words 'trout fishing in Arizona sucks'.  I have been spoiled by fishing states like Montana and Utah for trout in double digits. However, look at this catch by a friend, John Waters, and yes, in Arizona. I am amazed!

Waters, after fishing for several hours, thought he saw a large trout in a pool. He cast a crawfish-colored crappie jig tied to 6-pound test mono to the back of the pool. When he began to retrieve, he felt what he thought was a hang-up. However, before he got to the place he thought the large trout was, in frustration, Waters lifted his med-action pole to unsnag it.

Suddenly he realized his line was moving. To quote Waters, "I set the hook and the whole pool exploded". Even then, he still had idea how big this trout was. After several runs up and down and across the stream, the huge trout ran downstream and beached on a shallow gravel bank. John then realized how huge this trout was - it weighed in over 20 pounds. Amazing fish!

I understand this fish was stocked, but even so, this was still an amazing fish. Another cool thing was that Waters had a group of Boy Scouts with him. I am pretty sure he has ignited dreams of fishing futures for a new generation of anglers.