Campers Need To Be Bear Aware

As many people celebrate the summer weekends by going camping, the Arizona Game and Fish Department reminds campers and all outdoor recreationists to be bear aware. A few simple precautions can go a long way towards protecting both people and bears.

"Humans are usually to blame for bears that become habituated and lose their fear of people. Bears quickly learn to associate campgrounds with food sources, placing both people and bears at risk," says April Howard, a department large carnivore biologist.

"We say 'a fed bear is a dead bear' because once a bear is habituated through human actions, it may be euthanized due to the threat it poses to people."

Campsite food sources can include uncleaned BBQs, used plates, discarded wrappers, food stores and pet food. The food odors attract bears that have a very keen sense of smell - approximately seven times better than a bloodhound and 100 times better than a human.

• Keep a clean camp. Store food items and trash away from your tent or sleeping area. Even an empty food wrapper can attract a bear from a long distance.

• Wash up before going to bed to eliminate odors.

• Put food waste and garbage in a secure location such as a bear-proof dumpster. 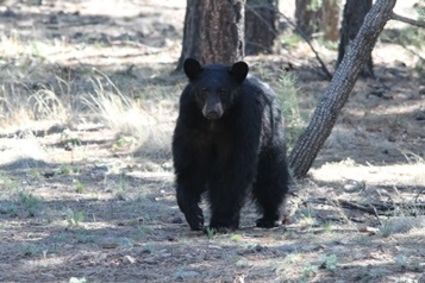 • Encourage others to take these precautions. Discouraging bears from a campground requires everyone do their part.

If you do encounter a bear, try to scare the bear away by making yourself look as large as possible, making loud noises and throwing objects towards it. Do not run. In the rare event of a black bear attack, fight back aggressively and use bear spray.

Arizona has had one fatal bear attack, which occurred in Pinetop in 2011. However, there are numerous reports each year of bears in close proximity to humans that could lead to serious injury or even death.

For more information or questions on living with bears, visit the department's Web site at http://www.azgfd.gov/urbanwildlife.