Its time! Choose your species and technique

Lake Powell is officially open for fishy business.  The lake has now stabilized and is slowly starting to rise.  Water temperature is rising. Bass are moving into the shallows. Stripers are found in all portions of the lake. The peak of spring fishing opportunities begins right now. Let's look at each species of fish and what they have to offer.

Bass are ready to spawn and lake level is stable. These are perfect conditions for sight-fishing.  Male Bass build nests in 3 feet of water by dusting the sand and debris off rocky structure with their tail.  When temperature warms to 62F or more, female Bass are herded on to the nest and adhesive eggs are laid on the rocks.

Then the male Bass guards the eggs for the five days it takes them to hatch. Lake Powell water is crystal clear in the nest-building zone over the majority of the lake.   Head to shallow water and visually search for the newly constructed nests along a rocky shoreline or cove.  Cast a light plastic grub (1/8th ounce) or wacky rigged senko (no weight) and let it settle onto the nest.

On the first day or two post spawn, the male Bass will be super aggressive and hit the grub every time one is thrown close to the nest. Later in the incubation period, the aggression drops off.  Males are visibly found in shallow water while larger females will be nearby and less visible in deeper water. Sight fishing for Bass should peak during the next weeks.

Largemouth Bass and crappie follow the same pattern with male Bass and crappie building nests in rock structure but they will also choose a spot near brush. This year brush includes a sunken tumble weed or any other woody habitat that can be found in a brush-poor environment.  As the lake goes back up, more brush will be covered and it will be easier for crappie and Largemouth Bass to find the right nesting habitat.

Largemouth Bass, smallmouth Bass and crappie will be nesting now and continue until at least the first week of May.  Sight fishing will be best for the next two weeks until the lake rises and muddies the clear water making the nests harder to see. When the lake goes up 10 feet, the first nest built (now 13 feet deep) will still be occupied and difficult to see in murky water.

Stripers are separated by age, health, forage and behavior.  Here is the breakdown.  Juvenile Stripers (less than 3 pounds) are widely spread and feeding in zooplankton schools, which are found in open water. Plankton schools are shallow so young Stripers can be found by trolling small crankbaits in clear or cloudy water.

Mature Stripers are found in the backs of productive canyons where plankton is available to eat while waiting for Shad to spawn and provide the food needed to begin the warm summer period. These larger fish (3 pounds and greater) can be found by trolling and casting in the backs of major canyons with perennial streams or murky water.

Some canyons with sediment deposits in the back have a consistent low-visibility area, which is often more productive than clear water and helps both forage and sport fish hide from each other.

Senile fish - those that did not compete well with their school mates and have lost some body condition - have moved to the main channel where they roam along the canyon walls looking for food that is not available. These are the easiest fish to catch as they are very hungry and will return to the same spots each day to feed on leftover chum from anglers who used bait to catch fish previously.

The best fishing spots are at the dam - both east and west sides near the barricade, Buoy 3 on the right-hand corner before turning toward Antelope Canyon, Power Plant intake under the chain link fence on the south side of the lake just past Antelope Point Marina, and at many places in Navajo Canyon.

Schools move randomly along the canyon wall. If they are not hitting at the dam, my impatience requires me to try the other good spots instead of waiting for the school to come to me.

Best bait fishing is found in the southern lake because more forage fish are produced in the more fertile areas of the lake fed by the Colorado and San Juan rivers. From rincon north, trolling, casting and spooning produces more Stripers than bait fishing. 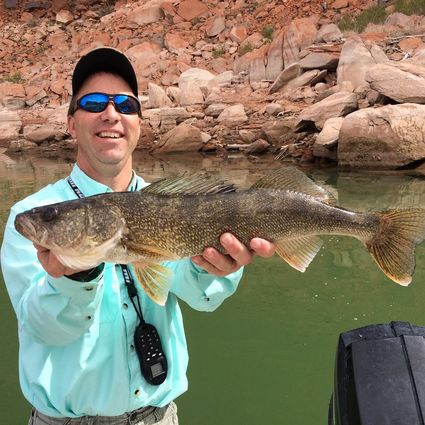 NOW! -- Bass, crappie and stripers are heating up and getting easier to catch each day. Walleye are the next species to be caught in big numbers. Lake Powell fishing is exploding with great catching opportunities right now.

Walleye are starting their spring feeding binge.  There are more walleye in the lake upstream from Bullfrog, but in the southern lake, they are found from Padre Bay to Dangling Rope and beyond.  Walleye are best caught during low-light periods both morning and evening, but mud lines produced by wind and wave action are productive daytime walleye feeding locations.

Bass fishermen catch walleye while working plastic baits slowly along the bottom.  Trollers catch them when a mid-range lure bottoms out at about 12 feet while crossing a rocky point.  Some anglers fish specifically for walleye while slow trolling bottom bouncers or while casting night crawlers on worm harnesses.

Choose the proper bait, location and technique to select your favorite fish. All are readily available and the time is now!