Chandler, AZ resident soldier, Brendan Patrick Danaher aka "Yogurt". 33 years old, Brendan lost his extreme battle with cancer and related tumor involvement after having his leg amputated in an attempt to contain the cancer. Brendan passed May 11th after becoming paralyzed due to pressure on his spine from a tumor growth and related complications.

•Brendan served with Attack Company 1st Battalion 509th Parachute Infantry Regiment "Geronimo's" and deployed to Abu Gharab, Iraq from 2004-2005. He also served with Embedded Training Team 9782 "Regulators" in Helmand Province Afghanistan in 2007 where he received a purple heart after suffering an IED blast.

We offer our condolences, thoughts and prayers to Brendan's wife Emily, his family and battle buddies with whom he served.

Brendan's Story In A Letter To Don McDowell - April 2016: 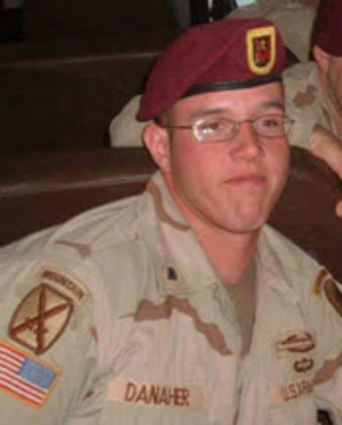 I started having knee pains in 2012, I tried to get an appointment with the VA but when I got out of the military the VA didn't assign me a doctor. I called the VA to get an appointment and they advised me that it will be a year wait for an appointment just to be assigned a doctor. Once I was assigned a doctor I would have to wait to see a doctor to address the knee pain. Since I was in pain I choose to go through my private insurance and the doctor advised I had a small tear in my meniscus, the doctor treated with physical therapy. I eventually stopped physical therapy and six months later changed doctors. The next doctor used the old scans and gave me cortisone shots and more physical therapy. I went to physical therapy for three months with no improvement, the therapist called the doctor and a new MRI was ordered at this point, I couldn't keep my knee straight. It took three MRIs before I could get through the MRI. I than had an appointment scheduled for three weeks after the test, however I received a call the following day and was given a referral to MAYO. I met with a surgeon in late October 2013. After many tests, I was diagnosed with synovial sarcoma. At this time the surgeon gave me a few options however after the surgeon talked to multiple surgeons my only option was amputation. I had my above knee amputation on January 2, 2014. I contacted the VA after I had surgery and informed them of my cancer diagnosis and the VA started jumping through hoops to get me assigned a doctor. I have now been assigned a doctor but feel comfortable with my team of doctors at Mayo and have chosen to stay with my Mayo doctors. After the recovery I underwent chemotherapy for three months. At this point I was cancer free however in January my scans came back questionable and has another biopsy. In early February I had two tumors in my spin and a couple other spots, the tumor in my spin actually fractured my back. I underwent radiation for my spin and ribs. Once I completed radiation I started chemotherapy again. I had two rounds and had more tests after the first two rounds the scans showed the previous spots were starting to be reduced however new tumors started to form, therefore the doctors changed the chemotherapy regimen to stop the new tumors from forming. On July 9 I started to feel really bad, and was taken to the emergency room and was airlifted to Barrows with a brain bleed however after more tests at Barrows we found out that I had a 3 inch tumor on my brain. I underwent emergency surgery to remove the tumor and spent 7 days in ICU. Because I was not responsive at the time I got to Barrows they didn't have time to go through all the required tests before surgery the surgeons didn't remove the whole tumor because they didn't want to risk me losing my ability to speak. Once released we met up with my doctors at mayo to undergo radiation to take care of the rest of the tumor, however once more tests were completed I had to undergo a second brain surgery because the tumor was almost the same size and my only option to live was to do the survey again. I had the surgery in August. At this point once I recovered from surgery I completed radiation on my brain and have had clear scans since. After the brain, I started more chemotherapy for the rest of the tumors. I was on a different chemotherapy for two rounds and discovered new tumors. In March of this year my only options were to try and find a clinical trial or start a new chemotherapy that just came on the market but hasn't been test with my type of cancer or do nothing and let nature take its course. I have decided to try the clinic trial in IL.

I recently had tests done (Friday 4/22) and the scans showed that I have PE (pulmonary embolism) and spent the night in the hospital to start the blood thinners. I'm currently waiting to see if I will be eligible for the clinical trial with the new diagnoses. I'm leaving for IL on Tuesday to take part in the clinical trial.