It's A Great Time To Hike 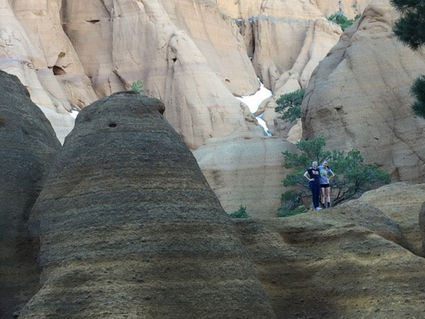 HER FAVORITE – The Anderson's granddaughter Trinity, who has been on hundreds of Arizona hikes, said this one might just be her favorite ever.

Until this past year, our visits to Flagstaff have always been during the summer. Since they were old enough to walk, we've been taking our granddaughters there to hike every summer, and we spend about a week exploring trails, caves, and everything the gorgeous area around Flagstaff has to offer. But now one of our granddaughters is a student at Northern Arizona University, so we go up to visit her and have gotten to experience Flagstaff during the fall and the spring. What a difference!

We went up to visit during February, which technically is winter, and in fact there was snow on the ground in patches. However, the weather was gorgeous - about 60 degrees. Our usual favorite hikes are high up on the mountain, but that was definitely out on this trip - the snow might be patchy in town, but the San Francisco Peaks were in prime skiing conditions, and all of our trails were covered by several feet of snow.

There was a trail we'd been meaning to try for several years, but it is at a much lower elevation than the mountains, and we always felt that it would have been too hot for a summer hike. This was the perfect time to try it, so we headed up highway 180 past the Snow Bowl road.

The trail we were heading for is Red Mountain trail. My source must have been old because it told us to watch for a sign about a geologic area at around mile marker 247. We saw a sign there, but it was announcing the trailhead. There is about a ¼ mile of dirt road to the trailhead itself.

My source also said that this trail was lightly used, but in fact, the parking at the trailhead was just about full. It must have been that gorgeous weather - everyone wanted to be outdoors. From the trailhead, you can see where you're headed - the mountain is actually a cinder cone and on the exposed side, erosion has carved hoodoos and slots that are most definitely red.

The trail is an easy hike of just under a mile and a half each way, with a slight but steady uphill climb on the way in. It starts down in junipers and even in February it got a bit warm on the first part of the trail. I suggest you bring a lot of water if you hike during the warmer months.

While you're on your way in, don't forget to turn around now and then. You have a beautiful view of several mountain peaks, and of course when we were there, they were covered in snow. There are some really amazing trees along the trail too - old, twisted trees. Take your time on the way in and enjoy the scenery along the way.

As you get closer to the hoodoos, the trail begins to follow a streambed. As you get even closer, the sides of the streambed rise and you're walking along the bottom of a V. The right side is all volcanic gravel. When we were there, some young men and their dogs were having a blast, using the steep bank of gravel as a slide. Dirty, but fun! At this point you start to see huge boulders and there is a small but very steep cliff between two boulders. It's only about six feet high, and a very sturdy kind of combination stair/ladder has been built to get you over it. I don't know about you, but I absolutely love hikes that have bridges or ladders or stairs - somehow they make it more fun.

Just another little way beyond the ladder and suddenly you feel as if you're in another world. Reddish hoodoos tower above you, and there are endless huge rocks to clamber over and around. We explored several small slot canyons, and we could hear trickling water from the snow melting. Up here, in what they call "the amphitheater", there was still snow in the shady places. In fact, there was a lot of snow, and some of it was coated with ice, which made for slippery footing but somehow enhanced that feeling of being an explorer that every good trail gives you.

We have taken our granddaughters on hundreds of hikes, and we have seen some gorgeous places, but Trinity told us that this was probably the best hike she's ever been on. Her roommate Danielle agreed, and they spent quite a long time exploring and climbing around the boulders and hoodoos. Such a huge reward for such an easy hike! This one is definitely on my top-ten list, and we will be coming back for sure.

This hike, though short, took us the whole morning because of all the time we spent exploring and photographing the amphitheater. The walk back to the trailhead is a piece of cake because it's a gently downhill all the way. Even though the trailhead parking was full (at least 15 or so cars), we saw few people on the trail itself.

Now It's Time To Eat

Half the fun of going on a hiking trip is discovering not only new trails, but also new places in the towns you're near. Before our hike, we had stopped for breakfast in Flagstaff. Now there are plenty of restaurants in Flagstaff, but we wanted to go somewhere different. I can go to Denny's at home if I want to. Trinity and Danielle like "quirky" places - coffee shops and little restaurants with atmosphere. We found a little place called the Toasted Owl (12 S Mike's Pike, open 8-4) and that's where we had breakfast.

It was awesome - it's a little place and the inside is covered with owls - embroidered, painted, printed, ceramic - you name it, they have an owl made from it. Also, the tables and chairs were all different, and they look like the kind you grew up with if you grew up in the late '50s and '60s. Our waitress told us that a lot of the stuff you see there is for sale, too. 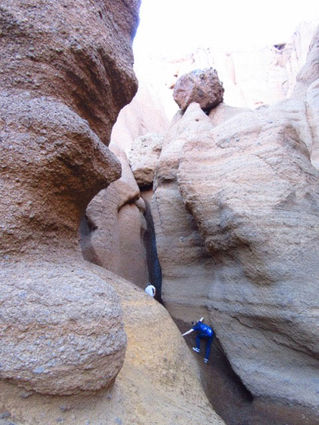 EXPLORING – The college students on this hike had a blast exploring small slot canyons and caves.

No matter how cute a place is, it doesn't make up for bad food. But the food at the Toasted Owl was delicious, and served up in vintage plates and bowls. All the plates and glasses were different, too. The girls loved it and so did I. We will definitely go here again, too. Trinity and Danielle said they could walk there from school, so they were happy to try it.

If you go up to Flagstaff to ski and the town itself isn't covered in snow, take a drive out to Red Mountain Trail if you get a chance. And, even if you don't ski, you won't be sorry if you make a special trip just to do this trail. It's pretty spectacular. I'd suggest going in cool weather, and take the kids. They'll love it.