There's A Lot Of Fishing To Do This Spring

The expected springtime fish movement to shallow, warmer water is now occurring. Stripers that were holding at 40-100 feet can now be found at 15-30 feet. Bass that were in deeper water are making their move to the backs of canyons and coves. Anglers should react accordingly. Use the thermometer on your graph to find the "hot spots" and then spend valuable fishing time on the warmest water available.

We started our weekly fish-report trip trolling in deep water in Padre Bay. The first striper activity was found near a sandy beach that abruptly fell into deep water as the beach transitioned into a rocky cliff. In clear water, we could see the cliff stair-stepping into deeper water. The graph confirmed that the depth changed from 15-20 feet and fell to 30-40 feet or deeper.

The secret to catching fish in this spot was to follow the shallow edge of the cliff by zig-zagging in and out as the depth changed. We changed to shallower-running lures to prevent snags in the shallow rocks.

With a few fish in the cooler, we then tested the new pattern by searching for similar cliff drop-offs where water transitioned from very shallow to deeper water. We found a similar spot a mile away and began trolling. We followed a rocky reef that extended well out into the bay. Within five minutes, the graph lit up with the largest striper school seen this year.

I held my breath hoping that the school would respond to our trolled rattletraps. It took 30 seconds before we doubled up with Stripers. We got those two fish in the boat and immediately cast to the following school and caught 2 large Stripers. This was reminiscent of striper boils as the trailing fish came into view and then swam off into deep water. We caught one more big striper and missed one before the school ran away not to be found again.

Then we went to the back of Padre Canyon and trolled up two more Stripers and caught largemouth while casting rattletraps in 10 feet on murky water in the back of the canyon. This summarizes what to expect during the next week over the length of the lake.

The subtle changes in fishing conditions have been confirmed as we have filleted fish from the past few trips. In mid-February we found a few Shad in stomachs of fish caught spooning. Most fish were empty. Recently, most of the striper stomachs are empty but those fish that did find food were eating crayfish and sunfish. These food items are in shallow water so fish that are searching for food are going to be found in shallower water.

The lack of Shad in the backs of canyons has caused fish movement of the large schools to the main channel. Large schools are swimming along the canyon walls looking for food. For those who have missed bait fishing the last two years, it seems the wait is over. Bait time is here again. 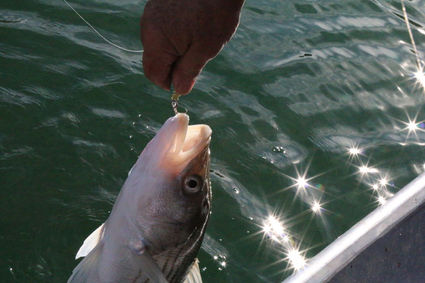 IT'S YOUR CHOICE -- Decent numbers of stripers have been caught on bait at Glen Canyon Dam this week. Reports from two groups recently found that anglers in the back of Navajo caught 21 stripers trolling while the group fishing at the dam caught 28 fish. The choice is yours. If you like to chase fish while trolling and casting, then head to shallow water in the canyons. If you like to kick back and fish bait, then go to deep water in the main channel. Photo Caption: Stripers have been hitting on spoons all winter but have now moved to shallower water where trolling and casting are more effective techniques this week.

Decent numbers of Stripers have been caught on bait at Glen Canyon Dam this week. Reports from two groups yesterday found that anglers in the back of Navajo caught 21 Stripers trolling while the group fishing at the dam caught 28 fish. The choice is yours. If you like to chase fish while trolling and casting then head to shallow water in the canyons. If you like to kick back and fish bait then go to deep water in the main channel.

The good bait fishing spots from previous years should be in play. Be the first to report catching fish on bait at the dam, Buoy 3 on the corner near Antelope Canyon, SRP power plant intake, Warm Creek Wall, Labyrinth Wall, and many other popular locations such as the Navajo Canyon points past the double islands.

Personally, I am going to try the most productive bait-fishing spot in the past five years by heading to the cove near Buoy 25 on the corner before reaching Gregory Butte.

I better rest up. There is a lot of fishing to do this spring!