A draft recreational boating Compatibility Determination for Havasu National Wildlife Refuge is now available for public review and comment. Due to an increase in safety concerns and the protection of wildlife habitat, the Service is in the process of reassessing all boating recreation activities taking place at the Refuge.

The Refuge began reevaluating boating usage when the need arose to extend a 17-mile restricted boating area by ½ mile of No-Waterskiing for the safety of the visiting public and the Refuge's trust resources. This action was implemented in May 2015. The Service is now inviting the public to participate in the Compatibility Determination process for recreational boating on the entire Refuge.

A copy of the draft Compatibility Determination can be found here.

The public comment period will be open for 30 days, beginning April 12, 2016. Comments will be accepted through close of business on May 12, 2016. Please send written comments to:

Comments may also be emailed to: Havasu_Boating_Comments@fws.gov

The Service is also holding public meetings to provide an opportunity to learn more about the purpose of the Refuge and to collect comments from the public. Both meetings will be held on May 3, 2016, at the Avi Resort and Casino. The Resort is located at 10000 Aha Macav Parkway, in Laughlin, Nevada. The first meeting will take place from 1 to 3pm in the afternoon and the second meeting will be held from 6 to 8pm that evening.

Your participation in this process is important to ensure future recreational activities on the Refuge offer quality experiences for all visitors while meeting the purpose of the Refuge.

All comments will be considered public records. Anonymous comments will not be considered. The Service will take all submissions from organizations or businesses, and from individuals identifying themselves as representatives or officials of organizations or businesses, available for public inspection in their entirety. However, individual respondents may request that their names and addresses are withheld from the public record. The Service will honor such requests to the extent allowed by law. If you wish to withhold your name and/or address, you must state that request prominently at the beginning of your comment. Please note that due to public disclose requirements, the Service, if requested, may have to make the names and addresses of those who submit written comments public.

Refuge should get rid of pigs and salt cedar, not boats - Todays News Herald, Editorial, April 16, 2016

A year after it further restricted motorized boating in the Havasu National Wildlife Refuge, the U.S. Fish and Wildlife Service is finally asking for public comments before making the changes official.

The process is backwards, of course, and the failure to follow a logical process makes it look like the agency is just trying to cover its tracks.

Moreover, what should've and could've been a relatively innocuous move to provide some still backwater areas for canoeists and kayakers now appears to be part of a long-term strategy to kill power boating in the northern part of Lake Havasu and for miles up the Colorado River.

The restrictions which went into place last year were ostensibly designed to keep some coves and backwaters on the Arizona side of the lake more tranquil. Most of the area in question is shallow or thick with tule reeds, making it unattractive for fast boating.

If left at that, reasonable people would probably say OK. But Fish and Wildlife is now asserting that waves from power boats potentially harm wildlife in the refuge, setting the stage for even more withdrawals.

Instead of a narrow stretch of water, the restricted area shown on agency maps extends across the north basin of the lake from Mesquite Bay northward.

North of the lake, there are already restrictions on power boats, personal watercraft and water skiing, part of a decade-long growth in those limitations.

Lake Havasu is historically a power boating lake. It's big enough for a lot of uses, but those other uses don't need to eliminate fast boats.

U.S. Rep Paul Gosar charges the agency misled his office about the restrictions and says they're not based on science or merit.

He's right. Are boat wake waves more detrimental to shoreline flora and fauna than wind-caused waves? Ask a kayaker whether wind or boat wakes are a bigger issue and the answer is likely the former.

How about the multi-foot water level changes in the lake, fluctuations mandated by the federal Bureau of Reclamation to meet power and irrigation demands?

And how can one tell, anyway, with shorelines choked with invasive salt cedar and ravaged by hordes of feral pigs?

The U.S. Fish and Wildlife has proposed possible regulations on motorized boats at the Havasu National Wildlife Refuge. For Havasu, some are worried the agency's proposal could hinder the region's river-based economy.

Topock66 rests on the edge of the Refuge, overlooking hundreds of acres of reeds through the Colorado River, north of the I-40 bridge. The smell of wood smoke lingers after a brushfire took place within sight of the popular restaurant and bar two weeks ago. The dock at Topock66 stretches into the waterway, but boaters may have to make some changes as to where, and how they can travel from there.

On the other side of the river, popular resort destination Pirate Cove provides a big draw for power boaters from throughout the country during its annual Desert Storm Poker Run and Shootout this month. With its sandy beaches and tropical ambiance, Pirate Cove is a favorite destination of Arizona, California and Nevada boaters.

Restrictions on where and how high-powered watercraft can travel could put a damper on resort business, according to critics of the proposed new rules.

Lake Havasu Marine Association President Jim Salscheider is an outspoken opponent of restrictions at the wildlife refuge, and believes that further restrictions could prove disastrous for Havasu.

"It would probably put Topock66 out of business," Salscheider said. "It could put Pirate Cove (in Needles) out of business too. The Chemehuevi reservation is building a new marina for its casino – they would be cut off."

Salscheider said that while Lake Havasu was once one of the top-20 bass lakes in the country, it would no longer be within the top 100.

"The Chemehuevi tribe, the Coast Guard, the BLM, law enforcement agencies and the Arizona Game and Fish Department all have an interest in this," Salscheider said. "This doesn't affect Laughlin or Needles – this affects Havasu more than others."

The Wildlife Refuge comprises 37,515 acres along the lower Colorado River, and protects 30 river miles. It encompasses 300 miles of shoreline from Needles, Calif. to Lake Havasu City, according to Fish and Wildlife.

The agency is conducting a study that would formalize restrictions on motorized boats that were put in place last year on the Refuge. Fish and Wildlife has invited public opinion at a meeting next month to discuss whether or not the Refuge is compatible with boating activities enjoyed by many of the lake's visitors – not the least of which include the high-powered watercraft that frequent Havasu's waters.

The 17-mile restricted boating area surrounding the Refuge was extended by half a mile last May, and water-skiing activities were restricted for the public's safety as well as that of the Refuge's resources. Now, proposed restrictions would prohibit motors of 30 horsepower or higher in Topock Marsh. All watercraft would be required to travel at no-wake speed in Topock Marsh, and no-wake speeds would be indicated by signs and buoys in other areas of the Refuge.

The Refuge's original intended purpose was to provide a safe habitat for the region's wildlife, while lending itself to wildlife-dependent regulation. Fish and Wildlife has said that watercrafts that don't create a wake, such as canoes and kayaks, will not be restricted.

John Galbraith, owner of Bass Tackle Master Bait Shop in Havasu, is wary of some of the proposed restrictions, but not all.

"It doesn't look like it'll impact the whole river," Galbraith said. "It seems like it's just Topock Marsh, which is full of stumps anyway. You wouldn't go over no-wake speeds there. But it's been a trend to close a lot more area, and the Refuge is the main thoroughfare between the lower and upper Colorado River."

Galbraith agrees with Fish and Wildlife, however, that excessive boat traffic throughout the region has caused damage to the landscape and habitat of the Refuge.

"A lot of the change is due to boats that go 70-80 miles per hour," Galbraith said. "It's had a substantial impact on the shoreline. I've been here for 40 years, and I've seen it deteriorate. The area is overtaxed with traffic, and it needs to be reevaluated. I'm totally in favor of reasonable restrictions, but making it a no-wake zone from north-to-south of the Refuge is not possible for state or local governments. I couldn't even imagine a 17-mile no-wake zone in a Coast Guard waterway like this."

The effects of new restrictions could be felt as far north as Oatman. While the small community's burro population attracts many visitors, the area is also a tourist destination that draws a large number of its visitors from the Colorado River.

Mike Buck owns a jewelry shop in Oatman, but lives in a home near Topock Marsh. He expects that future restrictions will affect many of the river's visitors. 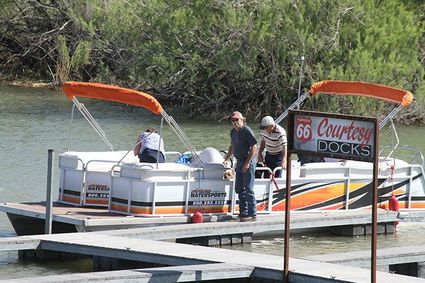 Boaters prepare to leave the dock at Topock66 on Sunday. The restaurant and bar, on Historic Route 66, borders Havasu National Wildlife Refuge, which may be subject to restrictions on motorized watercraft in its waters.

"In summer, a lot of people come to Oatman from the river," Buck said. "If they add too many restrictions, people may take their boats somewhere else. If they restricted boats with 30 hp or more, I wouldn't even be able to fish with my inboard motor. That's probably about 90-95 percent of the boats that are out there."

"We're all responsible for the lake," he said. "We have authorities to keep the peace, not to shut it down. If there's going to be a meeting, we need to be educated so that we can speak intelligently about the issues at hand."

Fish and Wildlife will seek open comment at the Avi Casino in Fort Mohave on May 3.

Residents can also email comments to Havasu_boating_comments@fws.gov, or write to: