Fire ranks number five among all boat losses according to the BoatUS Marine Insurance Program claims files. Dig a little a deeper, and those claims files also tell you the six specific areas that lead to most-reported boat fires.

If every boater paid attention to these six things, over a third of all fires aboard boats would be prevented. So what are the top six ways boat fires happen, and some lessons to take home?

26 percent of fires are due to "off-the-boat" sources: Over a quarter of the time, a BoatUS member's boat burns when something else goes up in flames - the boat next to theirs, the marina, their garage, or even a neighbor's house. It's every boater's responsibility to prevent fires, but when all else fails, having a good boat insurance policy is the last backstop.

20 percent of fires are due to "engine electrical": For boats older than 25 years, old wiring harnesses take a disproportionate chunk of the blame here. A good electrical technician can put one together for you as most boats of this age had relatively simple electrical systems.

15 percent of fires are due to "other DC electrical": The most common cause of battery-related fires is faulty installation of batteries - reversing the positive and negative cables or misconnecting them in series (when they should be in parallel). So take a picture. Label the cables. Use red fingernail polish to mark the positive lug. By gosh do everything to hook it up right the first time. 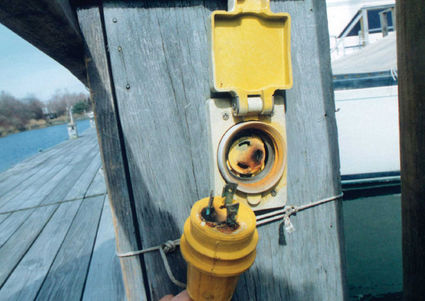 DANGER! -- This shore power pedestal inlet and cable aren't that far away from sparking a major boat fire.

9 percent of fires are due to "other engine": This one is all about when an engine overheats due to blocked raw water intake or mangled impeller, the latter of which can also happen after experiencing a grounding or running in mucky waters. Be sure to check the engine compartment after getting underway and replace impeller every other year.

8 percent of fires are due to "batteries": This fire fact is for the outboard folks to pay attention to. On older outboards, by far the most common cause of fires is the voltage regulator. At 10 years of age, failure rates on these important electrical components begin to climb. Once it hits 15 years old, it's time to replace.