Break In To Prison For St. Patrick's Day Fun

YUMA, Ariz. - In a twist on St. Patrick's Day traditions observed by some, folks in Yuma will start the holiday in jail - or to be exact, at the Yuma Territorial Prison State Historic Park.

This light-hearted new fundraiser will feature a reenactment of the infamous 1887 "Gates Riot" (a prisoner uprising and escape attempt), complete with the museum's Gatling gun being fired -- blanks only! -- from the iconic guard tower.

The gates will open to the public at 4:30 p.m. on March 17 and the $10 admission includes access to prison museum exhibits and live music by Tommy and the Drifters, with vendors selling food and assorted libations.

"We've held a fancy fundraising dinner in years past, but we wanted to try something new and include more people this year," said Charles Flynn, executive director of the Yuma Crossing National Heritage Area, which operates the historic prison along with the Yuma Quartermaster Depot State Historic Park. 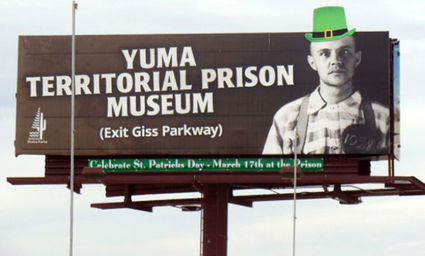 "This party is meant to express our gratitude to the entire Yuma community for its support and celebrate the success of local management.

"What we've collectively accomplished at the Yuma Territorial Prison since 2010 is a model of how to preserve and revitalize historic community treasures, not only in Arizona but around the nation," Flynn added. "We hope lots of people will turn out to celebrate what we've all been able to accomplish since this Yuma landmark was threatened with closure in 2010."

Tickets are available now at the Prison or at the door the evening of the event. For additional information on this event, please visit our Facebook page or call the prison at (928) 783-4771.