In 2016, BoatUS Celebrates Its 50th Anniversary

Some interesting history re: recreational boating since 1966 is reflected in its archives.

In 1966, boaters could buy a new mid-sized cruiser for about $7,000, outboard engines had just surpassed 100 horsepower, and recreational BOATING was growing on a large scale across America. It was also in '66 that the nation's largest recreational BOATING group, Boat Owners Association of The United States (BoatUS), got its start thanks to Founder Richard Schwartz who saw a need to make recreational boaters' lives better.

His vision of offering representation, improving safety, providing quality services at competitive prices and saving boaters money was all rolled up into the "service, savings and representation" motto that remains at the core of the more than half million member organization today.

"BoatUS has always been there for boaters and always will be," said BoatUS President Margaret Podlich. "Whether it's helping boaters have a safe day on the water, ensuring that BOATING taxes go to BOATING programs, offering competitive boat insurance coverage, or having the largest on water towing fleet in the nation, BoatUS is proudly the single source of exceptional service and savings. We're steadfast in our commitment to protect boaters and their rights, making BOATING safer, more affordable and accessible."

BoatUS will be celebrating its golden anniversary in 2016 with a series of special member events and coverage in its flagship publication, BoatUS Magazine, and other programs. A look back at five decades of BoatUS' significant impacts and innovation include the following:

• BoatUS is the first organization to fight for legislation on behalf of boaters, shaping national BOATING policy when Schwartz helps draft the watershed Federal Boat Safety Act of 1971 creating the US Coast Guard Office of boating safety. He also secured passage of the Recreational boating safety and Facilities Improvement Act of 1979 – also known as the Biaggi Bill – which affirmed that taxes and fees paid by boaters should support BOATING programs.

• The BoatUS Marine Insurance program starts in 1967 offering the first recreational boat policy in clear, understandable language rather than the unintelligible, centuries-old language from Lloyd's of London.

• BoatUS creates the only Consumer Protection Bureau (1970) for boaters to seek redress with manufacturers, suppliers or businesses as well as a Dispute Mediation Program. BoatUS Reports, the association's early member newsletter, eventually grows to become BoatUS Magazine, the largest BOATING magazine in the country with over half a million circulation.

• After two years of BoatUS lobbying efforts, in 1980 President Carter signs the Recreational boating safety and Facilities Improvement Act, authorizing $60 million in BOATING fuel taxes to be spent on boating safety programs and BOATING facilities improvements over the next three years.

• In 1982 BoatUS leads the successful fight to repeal the Federal Boat "User Fee" Tax, saving boaters up to $600 annually.

• As a result of the U.S. Coast Guard's no longer offering non-emergency assistance to boaters where towboat companies existed, the BoatUS Insurance policy becomes the first in the nation to feature on water towing coverage to its insureds.

• Also in 1983, the first BoatUS Catastrophe Team is established to assist the Houston Yacht Club following the disastrous landfall of Hurricane Alicia. Comprised of expert marine surveyors, claims adjusters and heavy equipment operators, in subsequent years the team becomes the "gold standard" for service to insured boaters after storm-related disasters. As a result of what it learns, BoatUS sets course to become the nation's expert at hurricane damage avoidance for boats and marinas, offering free preparation materials for boat and yacht clubs, marinas and boatyards.

• In 1984, Schwartz is widely credited in leading the passage of the federal Wallop/Breaux Trust Fund Amendment, today part of the Sport Fish Restoration and BOATING Trust Fund that now returns over $600 million annually to federal and state BOATING and fishing programs.

• BoatUS was an early pioneer in discount marine retailing, starting with a single product – a floating flashlight – eventually opening a nationwide chain of 62 BoatUS retail stores and catalog. The retail division was sold to West Marine in 2003.

• In 1994 TowBoatUS creates a 24-hour toll-free dispatch hotline to respond to members' needs. The dispatch system pioneers the use of computer mapping to find the closest towboat while connecting the boater directly with the towing captain through teleconferencing.

• Already a major influence on the national boating-safety stage, in 2000 the BoatUS Foundation and the BoatUS Clean Water Trust merge to become the nonprofit 501(c)(3) BoatUS Foundation for boating safety and Clean Water, which runs innovative programs ranging from the only free Online boating safety Course and nationwide life jacket Loaner Program for Kids to the Help Stop the Drops marina spill-prevention program and EPIRB rental program for offshore passages.

• Long before there was publicly available data on the causes of insurance claims, BoatUS develops the only recreational boat Damage Avoidance Program and publication to help BoatUS members avoid claims and injuries, Seaworthy. BoatUS insurance programs today total over $8 billion in hull value.

• BoatUS acquires Vessel Assist Association of America in 2003, the largest on water towing fleet on the Pacific Coast. The move adds a new West Coast 24-hour dispatch center connected to a coastal high-site VHF communications system which provides VHF radio communications far out to sea – a unique aspect not found with any other on water boat towing company. Today, TowBoatUS is the nation's largest on water towing fleet with over 600 towboats and 300 locations.

• In 2006, the epa starts wrestling with a proposed operational permit that could be required for each boat in each state. Working with the marine industry, BoatUS launches a massive two-year lobbying effort to pass the Clean BOATING Act, exempting recreational boats from permits intended to address ocean-going ships and offshore sources of invasive species.

• In an effort to help the storm-struck marina industry recover after years of intense hurricane activity and ensure boaters have dockage for their boats after a storm hits, in 2008 BoatUS holds the first ever, two-day Marina Hurricane Preparation Symposium designed to reduce damage and the loss of boats and marinas in storms.

• In 2011, BoatUS hand delivers over 15,000 comments from concerned boaters, sailors and anglers to the Federal Communications Commission demanding that the agency not go forward in its plans to allow a private company to put the reliability of the Global Positioning System (GPS) system at risk. The plans fail to win government support.

• Over 65,000 recreational boats are damaged or lost when 2012's Superstorm Sandy strikes the Northeast, making it the single-largest industry loss to recreational boats since the Association began keeping track in 1966. BoatUS mobilizes its largest-ever Catastrophe Team salvaging thousands of boats from the NY-NJ region as far north as Maine and inland to Michigan.

• In 2015, BoatUS offers the first insurance policy for boats rented through peer-to-peer rental programs. Fighting for anchoring rights in Florida, amending the nation's renewable fuels corn ethanol mandate, and reauthorization of the US Coast Guard budget top the list of legislative priorities. Forty-nine years after its founding, BoatUS begins a new era of growth and service to America's boaters.

About Boat Owners Association of The United States (BoatUS) 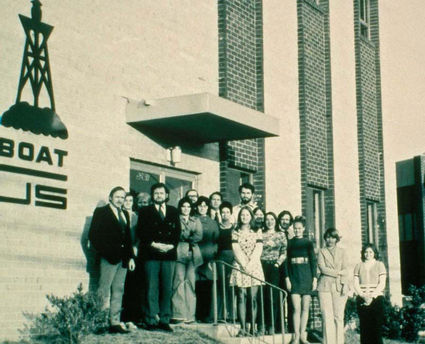 'BACK TO THE FUTURE' -- In 1974, just eight years after its founding by Richard Schwartz (shown fourth from left), BoatUS moved to new headquarters in Springfield, Va., with just 17 staff -- far fewer than the over 500 employees today.

BoatUS is the nation's largest organization of recreational boaters with over a half million members. We are the boat owners' voice on Capitol Hill and fight for their rights. We help ensure a roadside breakdown doesn't end a BOATING or fishing trip before it begins, and on the water, we bring boaters safely back to the launch ramp or dock when their boat won't, day or night.

The BoatUS Insurance Program gives boat owners the specialized coverage and superior service they need, and we help keep boaters safe and our waters clean with assistance from the non-profit BoatUS Foundation for boating safety and Clean Water. Visit BoatUS.com.