The evolution of the lead spoons or flat falls continues with local Striper Guide Derrick Franks, aka The Striper Snatcher. I told you previously of the 3" jig very effective in fresh and saltwater. Well he's taken the lure to the next level, with the 5", 130 gram version with high performance Daiichi saltwater hooks. The jigs performance on the fall is more erratic than any I ever seen or used. Like the 3" version, the Snatcher has standard colors and has the ability to custom finish with your secret color. Some of the new version will include a flash of metallic infused material "Flash Band" in the hydrodynamic recess on one side of the body. This really accentuates the flash and ultimately the bite. The jigs have been field tested in my favorite SRT color, silver with the black back, silver/black 3D eyes as late as this past Sunday producing up to 30 lbs class Yellow Tail in Mexican waters out of San Diego. Remember the fishing conditions where tough right after the storm passed. They crushed them and the Bonito. And with all successes, the words is out on these new Snatcher jigs, they're selling like pancakes.

Local manufacturer and guide, Derrick, has stepped into a world dominated by mega giant lure companies to compete for a niche market, Franks was recently recognized by In Fisherman Magazine for his ability to not only find fish but to put in the boat. You'll find the Stripper Snatcher now on Bartlett as well as Pleasant. There's not a tougher lake anywhere as Pleasant can be in December and the winter months, the 3" version is snatching fish out of 75 foot depths in the HumBug. This is the rule, not the exception for the new jigs. My guess is as the weather warms you'll find him on the saltwater slamming tuna he calls it Research and Development...whatever.

But wait! There's more! The Snatcher has developed a "Surface Iron to rival and outperforms the likes of the Tady 45 and sister irons. Again the erratic action, eye flash and the sound emanating from the sound chamber within the lure body creates a lure that fish will be hard pressed to resist.

On a recent trip to San Diego the new versions were snatched up by H&M Landing, Dana Point and numerous other San Diego local tackle shops. Boat owner and Captain Bill Wilkerson of the malihini Sportfishing ¾ day boat has placed his order to have available on board. Other boat captains have placed orders to their specific coloration and hook complement. Lures are being offered with various hook types and sizes or no hooks being outfitted angler specific.

The malihini, is now back in the water, at H&M landing, after undergoing annual maintenance and significant remodeling and upgrading for added proficiency and angler accommodations. The malihini is on line running ¾ day trips into Mexican waters for the Yellow Tail. These trips require your current Pass Port. For booking information call Rick at H&M Landing, 619-222-1144 or hmlanding.com. The Yellow Tail are biting and the boats are starting run since the angling community is past the holiday season and the weather patterns are starting to lighten up. Look for coming details of the malihini Yellow Tail Derby sponsored in part by Shake Rattle & Troll Radio and yes I'll be throwing my Snatcher lures. 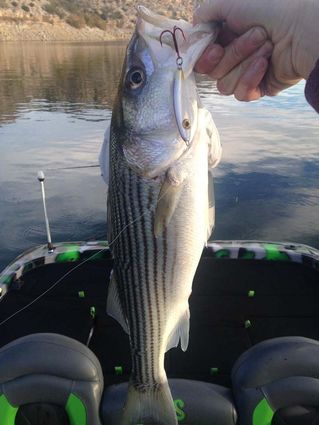 Local angler Jimmy Dwight has my SRT silver/black back heading to Punta Colonet, on the west Baja coast on Friday aboard the sportfishing vessel, Chief. It's a 110 miles run from H&M for the Yellow Tail. We'll have a report from Jimmy as he returns on Sunday.

Ask for the jigs by name at Phoenix Fishing Supply, 16th Street, south of Camelback, H & M Landing, San Diego and the http://www.shakerattleandtroll.com website. To contact The Striper Snatcher for custom baits or guide trip on Lake Pleasant, 480-259-2931. I'm Don McDowell. I use and endorse these baits!