A 50# Yellowtail was landed off La Jolla by angler Naum. The photo is by Victor Posada.

Kayak angler, Brian Fagan, on Jan 28, landed a 74.2 # White Seabass off La Joll. It was weighed in at Dana Landing. This could be an IGFA line class World Record. Brian's picture with the White Seabass was in a story in the San Diego Union Tribune on Tuesday of this week. I called Brian and encouraged him to submit the catch to the IGFA.

The 2016 Yellowtail Derby was jump started with 21 anglers signed up since Feb 1st. The Early Bird Special period ends March 15.

The 2016 Derby Announcement contains the Derby Schedule, and the Entry with Early Bird discount. The Website http://www.internationalyellowtailderby.com/

has been updated and one can enter online. 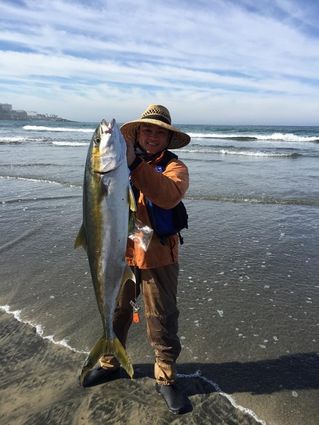 There has been a lot of news and excitement about Brian Fagan and his incredible WSB catch on Jan 28. He is featured on Western Outdoor News, The Log Newspaper, He was a guest on Rod & Reel Radio with John Cassidy yesterday evening. He has submitted his catch to the IGFA for a line class World Record. Attached is a new shot of Brian Fagan with his 74.2 WSB on the LJ Shores Beach.

I am sending out revised annoucements and Entry info as we needed to make a few minor changes:

Moved the Awards to June 6, Monday because The Bali Hai was fully Booked.

This will add one day to Fish, now 37 days, so the Schedule is revised.

Miss Yellowtail Derby 2016 - We are still searching, let me know if you know of a candidate.