A Weed Over Troubled Water

The plant's scientific name is your first clue that it is something that you do not want. Botanists know it as Salvinia molesta. It's commonly known as giant salvinia. Native to South America, the floating fern made its way to the United States via the ornamental plant industry. It's pretty, but the beauty belies serious economic and ecological harm that usually follow when it is accidentally or purposely released into the wild.

John Naugle would know. He's a fisheries biological technician at the U.S. Fish and Wildlife Service's (Service) Arizona Fish and Wildlife Conservation Office, in Parker, Arizona. Naugle is fully immersed in controlling the spread of the nasty plant from a waterway of great importance to the regional economy of Arizona and California. Giant salvinia showed up in the United States in 1995, and four years later it had a hold in the Palo Verde Irrigation District Drain that parallels the Colorado River. The irrigation drain delivers water downstream for agriculture. Since 2004, it has fallen on Naugle and colleagues to put a staunch on the spread.

He's pretty much "Mr. Salvinia." As long as the weather is conducive for plant growth, Naugle is out combatting the plant in the waterway. "For seven months of the year, I am on the water up to seven hours a day," said Naugle. "It's survey and treat, survey and treat-it's a near-continuous effort." That treatment is spraying an herbicide that knocks back the mats of the lime-green floating fern.

"Knock back" is often the best that can be done, according to the Service's Southwest Region invasive species biologist, Dr. David Britton. Britton says that complete eradication of giant salvinia is nearly impossible given how the plant survives.

"It's remarkable," said Britton, "you can break off a tiny piece of plant and it will start a new population." Britton notes that the plant easily gets carried by boats unintentionally, underscoring the need to be careful and inspect watercraft and trailers. "It grows fast, too, and will quickly cover the water surface, shading out all light."

The plant's dangerous growth habitat is spoken in its scientific name. The floating plant does best in slow-moving canals, backwaters or ponds. It can double the amount of surface area it covers in a week's time and create a deep carpet-a shroud three feet thick. That's troublesome for boating, fishing, waterfowl hunting, not to mention the value of private property associated with infested waters. 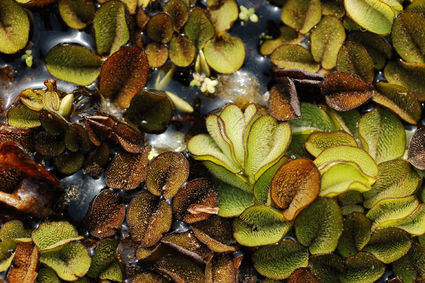 Then there's water delivery associated with public works, part of the reason Naugle performs his labor. Downstream of Palo Verde Irrigation District Drain are dams and water intake structures. Giant salvinia has accumulated and clogged structures in the past. But not so much anymore; Naugle has been successful at controlling the plant. He continues to keep a watch out, and herbicidal treatments are fewer and fewer because of his diligence.

"Once giant salvinia gets established," says Britton, "it will likely never be eradicated entirely. Prevention is the first measure-and it's cheaper than what it takes to control the plant." To learn more, visit http://www.fws.gov/southwest