A Site Of Contrasts

Fort Bowie Is The Perfect Place For A Winter Hike 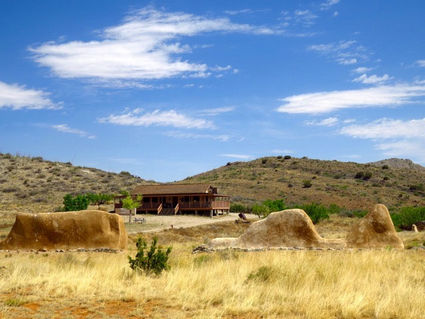 The Visitors' Center: Make sure you go inside and see all the cool things they have on exhibit.

This destination provides not only beauty and serenity but also lessons from a history that was the opposite: bloody and violent.

Fort Bowie is a National Historic Site near Willcox, Ariz., between the Dos Cabezes Mountains and the Chiricahuas. It's a fascinating place, and part of the charm is the fact that once you drive to the parking lot, you need to walk three miles to get to the site and back. This makes the visit an adventure.

The hike is pretty easy, with under 200 feet elevation gain. It's desert, so winter is the perfect time to go. There is a way in by car if you are really unable to do the hike, so you can contact the park about that.

More Than Just A Hike

The hike is half the fun and you'll see all kinds of things on the way in. There are interpretive signs along the way to explain what you are seeing as you look at the different plants and the ruins and remains of roads and other structures.

You'll also see signs telling you about some of the people who lived and worked in the area, and you'll learn about the native peoples who lived there too. The signs will help you understand how important this mountain pass was during the conflict between the U.S. Army and the Apaches in the late 1800s.

There is an absolutely lovely little spring on the trail, too. It's shaded by lots of green trees and it's cool and inviting even in the summer. This spring is called Apache Spring, and control of this water as well as of the pass between the mountains is what prompted General James Carleton to establish Fort Bowie.

It's amazing that such a beautiful and lush spot can be hidden in the desert. This spring supported the Fort and is still running. Pot sherds found near the spring show that this place has been used for thousands of years.

An Interesting Stop: The Cemetery

By the time the fort was closed, there were about 112 graves. The current markers are reproductions and were made as historically accurate as possible, using old photos and things like that.

You can also see the remains of the Butterfield Stage road. They built a stage stop at Apache Pass near the spring. This spring was also the site of the Bascom Affair - when Lieutenant George Bascom met the Chiricahua Chief Cochise. This incident is the key event that triggered the Apache War.

Bascom had gone after the Apaches because they had raided a ranch, stealing cattle and kidnapping the rancher's stepson. Bascom persuaded Cochise to meet with him, and Cochise brought along his brother, two nephews, his wife, and two children. Cochise claimed to know nothing, but Bascom tried to imprison him.

Cochise got away. He demanded the release of his family, but Bascom said he wouldn't let them go until the boy was returned.

This is when things went from bad to worse. Cochise and a bunch of Apaches attacked a group of American and Mexican teamsters. They tortured and killed the nine Mexicans and took three Americans hostage, offering to exchange them for his family.

Bascom insisted they return the boy, and Cochise and his men later attacked Bascom's soldiers while they were getting water. Cochise took off to Sonora, and left the tortured and murdered bodies of the Americans to be discovered by Bascom.

A few days later the Americans hanged Cochise's brother and nephews. His revenge, raiding and killing Americans, was the beginning of the 25-year-long Apache Wars.

The heliograph was incredibly important during the Apache Wars. A heliograph is a system of mirrors that allows you to send signals over long distances using the reflection of the sun's light. You can use signals in Morse code or any other messaging system you like.

The heliograph stations were built on mountains and allowed the Army to send messages almost instantly, telling other forts where the Apaches were and where they were going. "The telescopes of the Signal Corps, who garrisoned the rudely built but impregnable works on the mountains, permitted no movement by day, no cloud of dust even in the valleys below to escape attention. Little wonder that the Indians thought that the powers of the unseen world were confederated against them." Major George W. Baird, Century magazine, July, 1891.

(You can see how the heliograph worked in the Visitor's Center.)

It's hard to imagine how terrifying those times were when you are strolling peacefully along the trail to the old fort. There are beautiful stands of trees and cactus, and depending on the time of year you visit you will see different things in bloom. There are also a lot of birds in the area, so don't forget to bring your camera.

You'll also want to bring along plenty of water. You can refill your bottles and canteens at the Fort Bowie Visitor's Center, but even in winter, this is still desert and you need to stay hydrated, especially when you're hiking. We saw deer along the road as well, and rabbits all over the place.

This is an ideal place to visit if you have kids. The hike will let them burn off some energy and they'll probably even pick up a little history on the trail. I highly recommend this place!

From Willcox, drive 23 miles east on I-10 to the town of Bowie. Exit at the first Bowie exit and drive through town following the signs for Fort Bowie National Historic Site. Turn south on Apache Pass Road and drive 13 miles to the Fort Bowie trailhead. The last mile is unpaved.

While you're on this road, keep your eyes open for deer and other Wildlife. We saw deer eating the yucca plants!

If you're starting at chiricahua national monument, take highway 181 west to 186 and turn north. Follow 186 to Apache Pass Road and turn right onto the unpaved road. Stay on this road for 8 miles to the trailhead. This is the way we came. 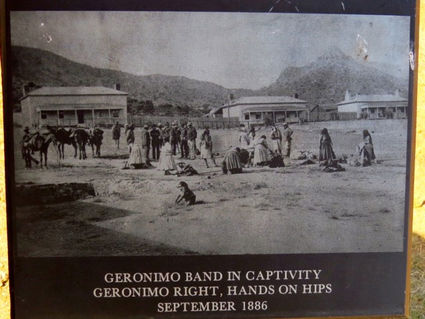 The Visitor Center is open Thursday through Monday from 8 a.m. to 4 p.m. and the ruins trail is open from sunrise to sunset. There are no fees at this site, and at the Visitor Center you can get water, use the restroom, and even picnic. There is no camping. Their phone number is (520) 847-2500. They are closed on Christmas Day.

There is no camping at Fort Bowie, but there are beautiful campgrounds at Chircahua National Monument, which is 25 miles southwest of Fort Bowie. Other campgrounds nearby are Indian Bread Rocks, 8 miles north; Hot Well Dunes, 33 miles north, and lots of camping all over the Coronado National Forest.

You can find motels and restaurants in the towns of Willcox and Bowie.