Lake Powell - The Fishery Is In Awesome Shape

Each November we conduct our annual gillnet sampling to assess adult fish population strength, numbers and health. Since we will be on the lake for two weeks, this issue's fishing report will the last of the season.

Sporadic reports will be sent out randomly when something unusual happens like a trophy fish being caught. For current fishing information during winter log on to Wayneswords.com. The next regular weekly report will be published the first week of March 2016.

Late fall finds that Stripers are hiding in deep water. They must not like the bright, full moonlight. There is a band of adult Stripers and gizzard shad suspended at the preferred temperature found right now at 40 feet. Trolling with down riggers works along the 40 foot thermal barrier this week. T

The best report came from trolling Kastmasters in the main channel at 40 feet near Halls Marina and in the channel upstream from Slick Canyon. The Slick Rock report included speed reeling spoons between 40 and 80 feet for quick striper hookups.

Young-of-year Stripers (6-10 inches) are in the backs of canyons in shallow water. They eat plankton, Shad and sunfish and can be caught jigging small spoons in 15-30 feet of water. We have seen Shad schools feeding on the surface in early morning and late evening.

Small spoons cast into or near the Shad schools will be clobbered by the many small Stripers that stalk these schools. When Shad are seen on top, game fish can be caught in close proximity.

Stripers continue to put on weight and are increasing in number. Shad forage is still high going into the winter season. Adult Stripers, which weighed 3-4 pounds this spring, produced a huge crop of young-of-year Stripers.

These adults will weigh 4-5 pounds in the spring and produce another bumper crop of young Stripers. If Shad have a good spawn in 2016, then Stripers will grow to even larger proportions. Expect fishing success in spring 2016 to be of epic proportions.

bass fishing continues to be the most productive target. Smallmouth Bass and largemouth are found in 15-25 feet of water. The most effective technique is dropshot fishing with plastic grubs and swim baits. Casting crankbaits is not as good now as it was earlier in the season.

Go slow and deep while maintaining bottom contact for the opportunity to catch some really nice smallmouth Bass. Largemouth Bass are now being caught more often in the same areas, particularly where aquatic weeds are growing on the bottom.

Bass numbers are high. Largemouth Bass need the lake to come up next spring and cover brush along the shoreline before that population can excel. Smallmouth Bass are doing very well. They need more forage from Shad, sunfish and crayfish.

Anglers can help increase size of smallmouth Bass by harvesting 9-12 inch fish while releasing larger Bass. There is intense competition for forage among smallmouth which can be reduced by keeping more Bass. 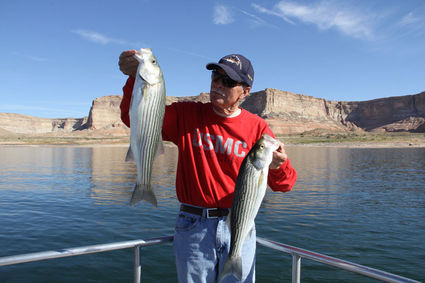 A TERRIFIC YEAR --Wayne Gustaveson examines a typical striped bass and finds it to be in great shape. The Lake Powell fishery was very healthy and fishing success was terrific in 2015.

These fishing patterns will hold up during through December. Dropping water temperature adds the possibility of catching walleye and crappie in shallow water using the same techniques favored in springtime.

Walleye numbers are very high in the northern lake. Plan a walleye trip in May to Good Hope Bay and see if it is possible to catch 50-100 fish per day. It could happen.

In summary, the fishery is in awesome shape. Thanks for fishing at Lake Powell in 2015 and talking part in one of the most amazing fisheries in the world.