We spoke in August 2015 that El Niño is "significant and strengthening," and could rival the strongest on record - even the Super El Niño of 1997. Perhaps there will be more and bigger fish and much-need precipitation this winter from the West Coast. Well it did and has, so did the fishing.

As the sportfishing season comes to a close, let me clarify, the anglers are not as enthusiastic about going fishing now as earlier in the season. We're all used to the fish bailing out of the area and we go on to other things to occupy ourselves, but not yet.

This year has proven to be a stellar year with warm-water species crowding the West Coast. We've had record-book black and blue marlin caught within eye shot of the coast, wahoo (large premium-grade fish larger than normally caught in the extended multiday trips to Alijos Rocks) yellow-bellied sea snakes washing ashore near Oxnard - all may be harbingers of things to come.

Experts agreed that the wahoo and bigger-grade tuna are form the Hawaii area. Hard tell, but most all were definitely out of our normal baseline fish.

Today, yellow tail are holding at good numbers around the Coronado Island and large 100-plus pound blue fin are still wreaking havoc on anglers with medium-grade tackle. The prediction is that this pattern may continue until the end of the year. The ½- and ¾-day trips are experiencing good numbers of bottom fish as excepted, yet the island trips are pounding yellow tail.

Several of the multiday boats are running 120-160 miles south hunting tuna. Recently, Jim Dwight, local Scottsdale angler on a day-and-a-half trip had an outstanding haul with several 25-30 pound ling cod - which is excellent table fare, although he hasn't offered up a filet yet - large sheephead, grouper and snapper of various type.

The 90-foot sport boat Chief made the run with 16 anglers, normally accommodating a limit load of 25 anglers. Chief is still running with short loads of anglers hunting the tuna and larger yellow tail.

The bottom fishing provides all with a bountiful load of good eaters. We're expecting another fish wave working up the Baja coast in the warm water. You can book Chief or one of the sport boats running south at H&M Landing, San Diego. 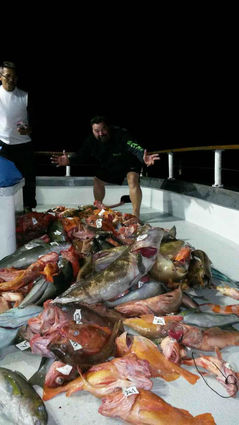 On Nov. 12, the Climate Prediction Center, National Centers for Environmental Prediction, NOAA/National Weather Service issued a multipage report synopsis that the "El Niño will likely peak during the Northern Hemisphere winter 2015-16 with a transition to ENSO-neutral anticipated during late spring or early summer"

Basically, the forecast remains intact that this year's El Niño will rank among the top three strongest episodes going back to the 1950s, meaning the fish are going to hang around for awhile.

Book a trip and chase them down. I expect yellow tail to be non-stop this year and moving into the 2106 season. Anglers definitely need to take advantage of this and go after the great rockfish species, which are excellent on the grill.