From The Deck - Derrick Franks's Amazing 'Striper Snatcher' Catches On

Local Striper Guide Derrick Franks, aka "The Striper Snatcher," is going big with a line of lead jigs. It all started this season in San Diego aboard the malihini sport fishing vessel, fishing ¾-day trips. Franks took a knife to the gun fight.

During the process, we had conversation on air about using the same swim baits, spoons irons and jigs on Lake Pleasant for catching larger stripped Bass. The saltwater colors are very effective. Back in the day when freshwater swim baits weren't on the market, I learned that the saltwater 5-inch replaceable soft-plastic bodies on ¾" lead triangular jig heads with the silver and black 3D eyes were just brutal on our local Bass lakes.

The rest is history; swim baits took the bass fishing industry by storm. The point here is what we use in saltwater, size depending, is also effective in fresh water. Even the gigantic Musky prop baits will entice giant Bass to attack.

Not long after the tuna trips, ding! The bell rang, and Frank is landing more and better fish with a Tady 45 iron.

Again - ding! He designs and tests a 3-inch, 1.7-ounce, high-quality painted jig on Pleasant. The beginning results are a near-state record tilapia jigging with his client Jeff Cooper, in the HumBug in 8 feet of water - certainly a Pleasant Lake record (5 pounds, 4 ounces) and catching 520 Stripers in six days.

I'm just saying the R & D has been completed. If it has fins, it will bite The Striper Snatcher jig.

The Striper Snatcher has a complete line of jigs that are effective in both fresh and saltwater. Frank has a line of standard colors and has the ability to produce the color pattern of your choice.

The 5-inch, 3.4-ounce saltwater version was field tested over the last two weeks of November by myself, Jim Dwight, local angler, and the tackle master at H&M Landing, Rick Marin. Both the baits were used for tuna and bottom-dwelling species. 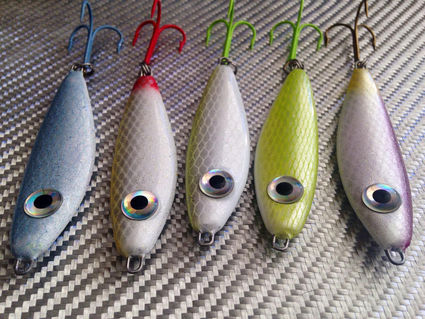 I'm Don McDowell and I endorse these baits!