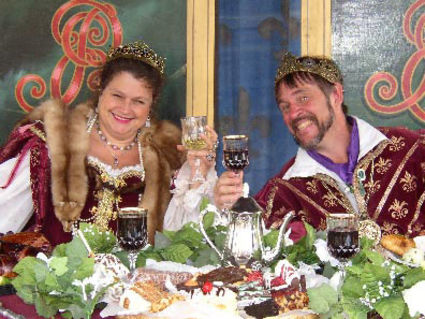 Main Events For The 2016 Renaissance Festival

A most-special event within this giant event is The Pleasure Feast. This is a one-and-a-half hour five-course medieval feast with live music and comedy entertainment, fine food and ample drink, plus festival gifts and souvenirs. With limited seating twice daily, advance feast reservations are recommended.

The most unique experience at the Renaissance Festival is the interaction with actors on the street who make everyone a part of the Village at Play.

Kids will love the interactive games and people-powered rides such as Da Vinci's Flying Machine, The Slider Joust, Piccolo Pony - a rocking horse bigger than an elephant. There is also the Dragon Climbing Tower, Castle Siege, the Maze, Archery Range and much more!

Those washer wenches don't just act silly on the stage; they make sure their audience members make fools of themselves too. The King is not just some guy in a crown; when you meet royalty at the Festival, it is hard not to bow with everyone else.

Maybe you will be asked to carry a secret message for the Lord Sheriff, or you may find yourself the object of a poet's admiration or scorn. Don't shy away from these encounters - you'll have so much more fun if you jump right in.

What To Do At The AZ Renaissance Festival

There are so many thing to do at the AZ Renaissance Festival that one needs to spend an entire day to experience the full event.

• Browse over 200 elaborately adorned shops offering an array of traditional goods surrounded among 13 stages of entertainment;

• The Renaissance Festival experience is meeting and interacting with these colorful characters, shopping for arts and crafts, and taking in a selection of over 150 shows every event day; 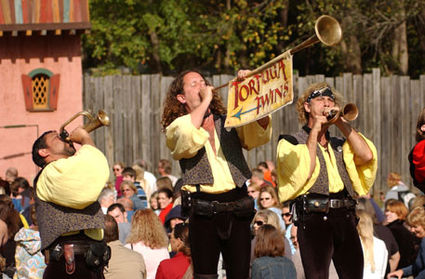 • There is a great variety of food for feasting, and a bevy of beverages including Medieval Margaritas, Da Vinci Coladas, Dukes of Daiquiri, wine, turkey legs, honey mead, beers and ales, along with soft drinks and lemonade.

One of the most popular attractions at the AZ Ren Fest is the live jousting tournaments held three times daily, complete with knights on charging horses, clanging weapons and a great deal of braggadocio.

The 16th century Festival is home to many popular traditions, including chomping down on a giant roasted turkey leg, and also features demonstrations of time honored crafts such as weaving, glass blowing, blacksmithing and pottery throwing. Find out more about this year's events at http://www.emol.org/azrenfest/