Four Of Our Favorites 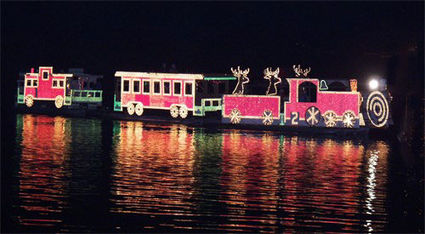 Throughout BOATING communities worldwide, parades of lights welcome the holiday season. There is nothing more spectacular than colored lights sparkling on boats as they ply the rivers and lakes and bays - truly beautiful gifts to all those who some to see and celebrate.

Here are four of our Southwest favorites for you to put on your calendar in time to plan ahead for the one you hope to visit in 2015.

Lake Havasu: 'Sparkle under the Stars'

Up to 50 boats brightly decorated in their holiday best will delight children and adults alike on Friday, Dec. 4 and Saturday, Dec. 5 at 6:30 p.m.

Watch the boats cruise through the Bridgewater Channel beginning in Thompson Bay and continuing under the London Bridge to the north end of the Channel, with a turnaround at Windsor Beachand back.

Bundle up and take a stroll through the Channel - the only time you'll see the Channel packed full of boats and boaters in winter gear at night. Come cozy up with family and friends and create treasured memories of a favorite holiday tradition!

This year's theme is "Sparkle under the Stars."

Boat parade participants and sponsors invite you to visit the docks in front of the London Bridge Resortwhere parade floats will be lit up nightly beginning at dusk.

There will be great viewing at the Nautical Beachfront Resort (the starting point of the Parade of Lights),Rotary Beach, throughout the Channel on both sides between Rotary Beach and Windsor Beach, the English Village, across the London Bridge, and at any of the restaurants along the Channel. (If you plan on watching from the Channel restaurants, early reservations are recommended.)

There is no charge to view The 33rd Annual Boat Parade. Plenty of free parking is available at the English Village and in the parking areas on the island near the Channel. Plan to get there early as traffic around the London Bridge can become congested.

Light up the night and be dazzled at the Valley's most unique holiday event - the Fantasy of Lights Boat Parade Presented by SRP at Tempe Town Lake on Saturday, Dec. 12 at 5 p.m.

Begun in 1999, the Boat Parade will feature as many as 50 festively lighted boats of all sizes. After dark, more than a thousand luminaria will illuminate the sidewalks and paths of Tempe Beach Park, a special display provided by Tempe South Rotary.

Fireworks will light up the night, too. The Fantasy of Lights Boat Parade fireworks finale will conclude the light-filled night following the end of the boat parade.

Special guest, Santa Claus, will hear children's gift requests in Tempe Beach Park. Bring your camera! Families are encouraged to bring their own camera for free Selfies with Santa. Admission for spectators is free.

Do you want to take part in this Tempe tradition? Families, community groups, and companies are invited to enter the boat parade with their own lighted and decorated water craft. Visit http://www.downtowntempe.com for more information.

The San Diego Bay Parade of Lights is a time-honored holiday tradition brought to San Diego by the BOATING community. Join us this December for our 44th annual Parade on San Diego Bay, with more than 80 boats lavishly decorated according to a new theme each year.

The San Diego Bay Parade of Lights is held two consecutive Sundays each year in December, this year on Dec. 13 and Dec. 20. The Parade proceeds from Shelter Island past Harbor Island, the Embarcadero, Seaport Village, and Ferry Landing in Coronado.

The procession will start at 5:30 p.m. and will follow the predetermined parade route.Whether a participant or spectator, the Parade of Lights is a festive and delightful experience for all!

The Grand Prize from Star Clippers is a luxury cruise package for two aboard one of the incredible sailing ships of Star Clippers. Grand prize will be chosen at random from the pool of participant boats that complete both nights of the San Diego Bay Parade of Lights. Cruise destination to be announced.

Marv Sloben, the parade's official photographer, has photos of the boats. He can be contacted via email at Marv Sloben msloben@san.rr.com

The 107th Newport Beach Christmas Boat Parade and Ring of Lights will be proudly hosted by the Commodores Club of the Newport Beach Chamber of Commerce, Dec. 16 through 20.

Join over a million viewers as you watch beautifully decorated yachts, boats, kayaks and canoes sail along the harbor in the 107th Annual Newport Beach Christmas Boat Parade.

As Newport Beach's Christmas Card to the world, the Newport Beach Christmas Boat Parade will set the harbor ablaze for five consecutive nights, beginning Wednesday, Dec. 16 and ending Sunday, Dec. 20. The parade starts off Bay Island at 6:30 p.m. and finishes at the same site at approximately 9 p.m. each evening.

Beautiful multi-million dollar yachts, kayaks, canoes and other small boats will light up the harbor as a dazzling array of holiday lights and music fill the air at the Newport Beach Christmas Boat Parade. Many of the boats will be richly decorated with animated Christmas scenes accompanied by music and costumed carolers.

Some boat owners in the past have spent over $50,000 to decorate their vessels for the event. The Christmas floats will wind their way some 14 miles around the harbor to give viewers in restaurants, yacht clubs, on public beaches, and in private homes an incredible sight that has delighted millions of people for a century.

The Newport Beach Christmas Boat Parade, which has been hailed as "one of the top ten holiday happenings in the nation" by the New York Times, is truly a magical holiday tradition for all ages. The parade continues to be a premier event during the holiday season in Southern California that brings joy and happiness to all that view it.

With its own judged categories and prizes awarded, the Ring of Lights has become as celebrated as the boat parade itself.