Now Is A Good Time At Lake Powell

Fishing is really good now for bass and stripers for those who like the challenge of matching wits with fish that are on the move.

My last fish report expressed the hope that stripers would start boiling again, but to my dismay, no boils have been reported this week. Unforgettable boil action has occurred in August, September, and early October but each of these episodes has been interrupted by quiet periods when stripers stay deep despite a high abundance of forage.

When boiling stripers do splash on top in big groups, it is easy to find and then catch them with surface lures. I hope that happens soon but, while waiting, stripers can still be caught in large numbers.

Subtle changes have occurred recently that give clues to finding striper schools. Water temperature is still warm, which means that adult striped bass remain in deep water most of the time, but they will come to the surface to feed for quick bursts. As water temperature continues to decline, stripers can stay on top for longer periods.

The last storm front seemed to allow bait fish and stripers to relocate. Shad schools that were trapped in the backs of canyons made a quick move to similar spots but perhaps in the next canyon. Large striper schools had been seen this but in different bays than previously reported.

It is now necessary to find big schools of shad and stripers as they move from spot to spot. Schools are easy to see on sonar graphs. Striped bass schools are often shaped like a Christmas tree, while gizzard shad schools appear as a thick band or cloud of fish layered in a horizontal line slightly above the lake bottom.

Threadfin shad schools appear as a suspended balloon-shaped cloud in open water. Finding a threadfin school is my goal because all other game fish, even catfish, are watching shad closely right now.

Trolling shallow-running crankbaits has been a successful technique for capturing juvenile striped bass. Recently, these smaller stripers have moved shallow and started to eat plankton as they do in the springtime.

Catching small stripers is the first step in finding the adults. Juveniles live and feed in warm water. Adults "look up" to see what the youngsters are doing. When juvenile stripers find a threadfin shad school, adults can quickly come to the top and feed with the kids.

A small striper caught trolling has the attention of larger fish that follow and then watch for food in deeper water. Each time a young fish is caught trolling, drop a spoon to the bottom or cast a crankbait behind the small fish to attract the larger school.

While trolling, diligently study the graph to detect striper schools resting on bottom. Glance up often and scan the surface for jumping stripers. Gizzard shad are active jumpers now, but stripers have a different, more aggressive splash. Troll toward the surface activity for best results.

'Hard Work' Is Worth It

When a resting striper school is seen on the graph, stop and drop spoons quickly into the group. The spot can be marked for a return engagement but stripers are on the move and may not be there when you return.

This may sound like a lot of work, but the reward may be 50 large adult stripers caught from one school in short order.

The other option is to move to the shallow shoreline and cast surface lures during morning and evening prime time for large and smallmouth bass. Shad movement has bass on edge and looking up for the opportunity to feed. Bass fishing is steady and productive all day long.

Use plastic baits in 15-30 feet of water to target larger bass. Small bass are very aggressive and can be caught trolling, casting and jigging along primary points in the bays or on rockslide areas in the canyons and channels. 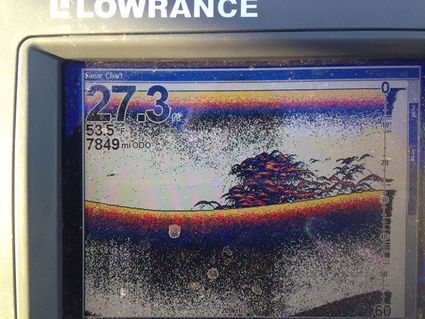 SPOON THE STRIPERS -- Striper schools can be readily seen on a graph. When a school is detected under the boat, quickly drop a jigging spoon into the mass of fish and work it up and down. Hook the first fish and the rest will follow as they try to eat the spoon. Get another spoon in the water quickly to catch many more.

Channel catfish are active at dusk. They have grown larger this summer with the abundant shad population and they are more aggressive than normal. I often catch catfish while spooning on the bottom for stripers.

Resting deep-water striped bass can be caught on bait in 30-60 feet of water in the shade of main canyon walls. Mark the fish on the graph, drop chum and catch large stripers.

Fishing is really good now for bass and stripers for those who like the challenge of matching wits with fish that are on the move. As the water temperature drops into the 60s, larger bass, walleye and crappie will become prime targets.