Come Welcome Back The Trout To The Colorado River

BULLHEAD CITY, Ariz. –– Game and Fish and Mohave County are planning a "Welcome Back the Trout" day on Nov. 21 to commemorate the return of this popular sport fish. The event will take place from 11 a.m. to 3 p.m. at Davis Camp in Bullhead City.

Fish will be stocked prior to the event. This will be the second year of trout stockings since the Willow Beach Hatchery ceased stockings from November of 2013 to October of 2014.

During the clinic hours, individuals may fish without a license. Walmart and Riviera Marina will be donating raffle prizes for the kids. Game and Fish will have educational booths, as well as rods, reels, and bait, for those in need. Personnel will be available to provide assistance to novice anglers.

Before last year's Welcome Back the Trout event, trout stockings south of Davis Dam had been in hiatus. On Nov. 21, 2013 the Willow Beach hatchery conducted an emergency stocking of 11,000 rainbow trout when the low lake level made it impossible to draw in water due to a damaged lower-level pipeline. This fact, along with additional federal budget cuts, resulted in the closing of the sport fish part of the hatchery.

In early 2014, Game and Fish provided the national hatchery with 22,000 sub-catchable rainbow trout to rise to a catchable size while lake levels were high enough for the one functioning pipeline to draw in water. Those fish were stocked in October of 2014. 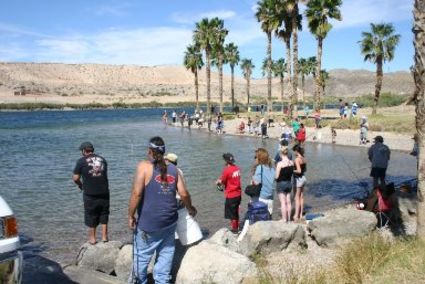 For this winter's stocking season, Mohave County transferred $50,000 to the AZGFD for the purchase of rainbow trout. This will result in similar stocking amounts as last year.

Fishing remains one of the best deals in regards to daily entertainment. An in-state license is $37 for in-state residents and $5 for all youth ages 10-17. The license is good for trout and is valid for 12 months.

For a statewide fishing report, log on to the Game and Fish Department's website at azgfd.gov. Licenses are available at the Kingman office, license dealers statewide, or purchase one online,