The fall sports season has begun with college and professional football kicking off. Not to be outdone, husky professional-size striped bass in Lake Powell are lining up to compete against the smaller-but-more-numerous underdog shad population.

Shad are huddling in the backs of the canyons hoping to come up with a playbook that will allow them to survive another day. Stripers are on the open water side of the scrimmage line waiting for the shad to venture out in the open where they become fair game.

Right now, the shad play is to keep crowding farther back into the canyons and coves. Stripers have been boiling in the channels and bays but are running out of open-water shad, which limits the amount of boils seen each day.

While the two groups are slightly separated, the best plan is to look for stripers huddling on the bottom in 40-80 feet of water. When a striper school is seen on the graph, drop a spoon, swimbait or white hair jig into the aggressive mass of fish. Hook one fish and the rest will follow trying to see what the first fish was eating. Watch the graph to see these following fish while landing the first one.

Water temperature is dropping, which allows bigger stripers to spend more time feeding on the surface. The Super Bowl happens when water temperature is 65-70F and big stripers can go all the way to the back of the canyons. There will be a resurgence of boils soon that will continue well into October.

Striper action is occurring lakewide now. The game plan is to be on site before the sun hits the water in the morning. As light intensity increases, a few small stripers and some gizzard shad will hit the surface.

Go to the splash spots and troll the area while graphing. When a large school is seen on the bottom, stop and drop spoons and swimbaits to the waiting fish. Repeat this fishing pattern in the last hour of daylight at night.

Graphing then spooning for striper schools works in the day time as well, but stripers are much more active in the early morning and late evening.

There are some husky large and smallmouth bass holding in the backs of canyons right where the shad schools are hiding out. Topwater lures and spinner baits retrieved over and through the weeds along brushy shorelines at first light will be smacked by very large bass. Be there very early to find the larger fish.

During the day, smallmouth bass from tiny to 2-pounds are going crazy along the entire length of rocky shoreline. Troll, cast or spoon near fast falling rocky structure to interact with an incredible number of smallmouth bass. Many bass anglers are now reporting 100 fish days over the length of the lake. 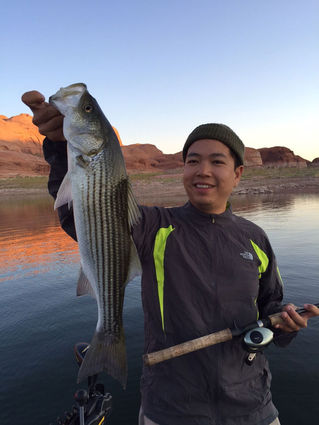 BEST EVER -- Louis Trinh and family found the best striper fishing that they have ever experienced this past week at Lake Powell. Stripers were caught boiling on the surface and then on spoons as the striper school went deeper. Fall fishing is peaking right now and will continue into October.

This report makes it sound as if fishing/catching is super at Lake Powell right now. Results from my recent weekly trip were 30 stripers spooned off the bottom in Warm Creek, along with a dozen smallmouth bass and one largemouth bass caught incidentally by trolling, spooning and casting, along with two large catfish hooked on spoons.

All of these fish were caught from 6:30-9 a.m. Other incidentally occurring fish that will add to the variety are walleye and bluegill.

Fall fishing is at the peak for the year and total fishing success is perhaps the best seen in this decade. It would be wise to take advantage of this fishing opportunity that may not be matched in the years to come.