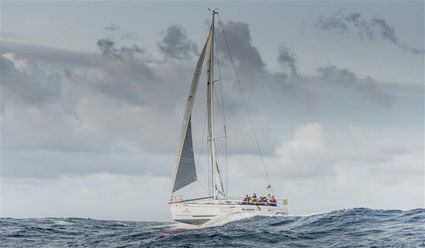 The idea of circumnavigating Sicily appeals to many. The lure of dramatic scenery, active volcanoes, dolphins jumping across your bow and extended summer is intense. For the sailor, the Rolex Middle Sea Race is the last regatta on the Mediterranean racing calendar, a must do on their offshore bucket lists, thus a pilgrimage to Malta ensues every October.

It is the challenge of a simple course, yet an incredibly complex race that appeals to professional and Corinthian sailors alike. The combination of myriad land features, with varied winds and sea states creates one of the most complex puzzles for navigators. Yet there will only be one winner. The team that has prepared extensively, studied the weather forecasts, scrutinised the nautical charts and convinced their team to execute their advice with precision. Preparation is fundamental, yet the ability to interpret the changing conditions while racing and adapt accordingly is what delivers success.

With just one mark to keep to port when leaving Valletta's Grand Harbour, the Rolex Middles Sea Race will take you through the Strait of Messina, around the Lighthouse of the Mediterranean – the bubbling volcano of Stromboli, through the Aeolian Islands and onto the Egadi Islands before you leave Pantelleria and Lampedusa to port and return to Malta for a dramatic finish in Marsamxett Harbour.

Covering more than 608 nautical miles, the fleet of 111 yachts, which competed in the 36th edition of the Rolex Middle Sea Race was no exception. Teams from 22 nations with yachts ranging from 9 to 25 metres in length set off under cannon fire and in very light air conditions on Saturday, 17 October.

The first to return were the Americans. Lloyd Thornburg's MOD 70 trimaran Phaedo3 christened the finish line just after midnight on Tuesday, 20 October. Closely followed by George David's canting keel maxi Rambler 88 who claimed monohull line honours. An impressive feat for the course record holders, who had hoped for a weather forecast that would enable them to better their time with their new Juan Kouyoumidjian design.

"We broke the course record in 2007 but that has not been broken this year. So it is nice to keep that one intact," commented George David. "This was a slow race, although we did have incredibly varied conditions, we saw zero to 23 knots of wind speed and everything in between and every cardinal point of the compass for wind direction and wind transitions of up to 90 degrees. In respect of the record, the first half of the race killed any chance and in the second half we had 160 miles dead up wind from Trapani to Lampedusa."

Going for the Grand Slam

"I would say we have had the short end of the weather in our races this year, definitely in the Rolex Fastnet, although we won our class and beat Comanche, it was a small boat race with good wind coming behind for the little boats." With the Rolex Fastnet and Rolex Middle Sea Race complete, Rambler 88 is going for the Grand Slam. George David and his star crew now have their sights set on the Rolex Sydney Hobart Yacht Race which starts on 26 December in Sydney (AUS), the ultimate offshore race.

Experience gained from many previous editions came into play for the two Italian teams in one of the most competitive classes, IRC 2 where it was Vincenzo Onorato's Cookson 50 Mascalzone Latino battling with TP52 B2 owned by Michele Galli, overall winner of the 2013 Rolex Middle Sea Race.

B2 (ITA) crossed the finish line just before midnight, to take first position in the overall rankings but there was a nervous look about the crew. They scanned the darkness outside Marsamxett Harbour, looking for the masthead light of Vincenzo Onorato's, Cookson 50 Mascalzone Latino (ITA). As their Italian rivals came into view, the tension was obvious onboard B2. Mascalzone Latino crossed the finish line minutes later and stopped the clock. After three and half days at sea, B2 corrected out to beat Mascalzone Latino by a mere nine seconds. An incredible feat, having sailed 649 nautical miles.

Thinking back on the race, Spanish navigator Nacho Postigo commented; "Crossing the finish line with an advantage of nine seconds in corrected time was a big surprise, but even if we had lost to Mascalzone Latino we would have been happy, because we know both teams raced a great race and we both would be fair winners."

"For me this was a typical Middle Sea Race: you struggle to find the wind, and when you find it, it happens to be in excess. This time it was more about light than about strong winds. I think it is one of the most challenging races in the world. There is a strong association between land and sea, and this drives you to take many important decisions along the way; sometimes, mistakes are really expensive here."

"We have a great team on B2. Francesco De Angelis is a very motivating person, always pushing. Michele is a fantastic owner, very competitive, and he really loves these offshore races. And then the rest of the crew: I don't know the number of (spinannker) peels we've did in these three days and a half, but they were all simply perfect."

A race of class and Classes

Over the course of six days, it was to become clear that this year's edition was a race for the larger boats. Those who could keep up with the favourable wind conditions, while the smaller boats fell prey to the light airs only to be whisked up on late Wednesday when the mistral came through.

Setting the pace in the fleet from the outset was Deiter Schoen's Maxi 72 MOMO (GER), who beat out rival Rambler 88 on corrected time to claim the victory in IRC 1. MOMO hardly let the American maxi out of their site during the three days and on corrected time would be the class winner, and finish third overall in the 2015 Rolex Middle Sea Race.

Meanwhile in IRC 3 the young Turkish team onboard Arkas Flying Box, racing a Ker 40, maintained their lead throughout the race to come out on top.

In IRC 4 it was Rockall IV a custom Corby 38 in first, with Elusive owned and sailed by the Podesta family in second place. The legacy of longstanding member of the Royal Malta Yacht Club, Arthur Podesta was felt throughout the race, with three of his children sailing onboard the family's First 45. Podesta was only person to have competed in every edition of the Rolex Middle Sea Race over the past 47 years.

Racing in IRC 5, Lee Satariano and Christian Ripard, overall winners of the 2014 edition were back to defend their title. The Maltese team sailed a close race to win their class with their J122 Artie. Then in IRC 6 it was the Beneteau 40.7 Three Sisters that beat out the other 18 boats in their class.

Looking to the future

The Royal Malta Yacht Club is built upon the strong link between Malta and the sea. As the organisers of this historic race prepared for the official prizegiving, held where the Knights of Malta ran one of the first hospitals in Europe for more than 200 years, Commodore Godwin Zammit commented; "For the first time in a while, we've had no major issues at sea, no rescues. It's been an interesting fleet with some high profile, big exciting multihulls - is a change from previous years. The variety is a good thing. We have many different kinds of boats from the big, professionally crewed boats to the family owned yachts. We are already looking forward to and planning for the next edition."

For over half a century, Rolex has contributed to the passion for yachting and its popularity by establishing strong ties with influential yacht clubs around the world, where sailing enthusiasts mix with hard core racers and elite skippers. A dozen yacht clubs now anchor a series of partnerships, which include Rolex's title sponsorship of more than 15 major regattas around the world. The brand's dedicated yachting timepieces, the Oyster Perpetual Yacht-Master and the Yacht-Master II, a regatta chronograph with an innovative mechanical countdown timer, remain the leading choice for sailors and enthusiasts worldwide.

About the Rolex Middle Sea Race

Marking the close of each Mediterranean yachting season, the Rolex Middle Sea Race is a navigator's race with numerous puzzles posed by the corners of its spectacular course that demand intense preparation. An anticlockwise circumnavigation of Sicily, it is unique in offshore yacht racing in that it starts and finishes in the same place. The active volcanic island of Stromboli – the lighthouse of the Mediterranean – is the symbol of the race, often illuminating the night sky with eruptions for crews passing after sunset. The Rolex Middle Sea Race is organised by the Royal Malta Yacht Club and has been sponsored by Rolex since 2002.